Manito Glade is a small shack in Red Dead Redemption 2 and Red Dead Online in the Roanoke Ridge region of the New Hanover territory.

It lies north of Annesburg and northeast of Black Balsam Rise.

The shack is fairly small. There is a chimney, a dining table in the middle of the shack and a rustic chair on top of a tattered rug in front of the fireplace. A draw can be found with the treasure map inside, and various other provisions can be taken from around the room. 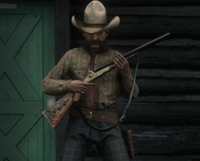 The Hermit confronting the player at the entrance