At some point prior to 1899, Mary-Beth got into trouble when she stole watches and wallets from several men. She was found by the Van der Linde gang while being chased by her pickpocketing victims, and was presumably rescued by them before joining the gang.[1]

Mary-Beth goes to Valentine with Uncle, Arthur, Karen, and Tilly to look for possible leads. Mary-Beth soon finds a lead on a lucrative train robbery. Later, she and the other female members of the camp can talk to Arthur about his recent events.

Not long after, Sean MacGuire is rescued from Blackwater and the gang have a party. Mary-Beth asks Arthur to dance with her, and the player can either accept or decline.

Mary-Beth can assist Arthur and Sean in robbing a stagecoach. She distracts the drivers to allow Arthur and Sean to attack it. At the end, she is captured but Arthur saves her by killing the guard who held her hostage. Afterwards, she, Arthur and Sean divide the money between themselves and return to camp.

Not long after setting up camp at Shady Belle, Arthur comes across Mary-Beth reading and goes to talk with her. After talking about their pasts over a cigarette, Susan Grimshaw interrupts them about the disappearance of Tilly Jackson. Not long afterwards, Mary-Beth screams upon witnessing the mutilated corpse of Kieran Duffy enter camp on horseback as the O'Driscolls attack the gang. She later expresses her grief over his death.

Arthur can tell Mary-Beth that he is terminally ill, diagnosed with Tuberculosis. Mary-Beth gives him her sincere condolences, but tries to cheer Arthur up by encouraging to make his last moments count.

As the gang begins to fall apart due to Dutch's increasingly erratic behavior and decisions, Mary-Beth eventually leaves alongside Simon Pearson, Karen Jones and Uncle. Dutch bitterly informs Arthur of their departure.

Mary-Beth's encouraging words to Arthur can be one of the lines he reflects upon during his last ride.

By 1907, she has become a romance novelist under the pen name of Leslie Dupont, and is seen writing a book in the credits. John Marston can encounter her at the train station in Valentine, where the two talk about their new lives, while also reminiscing about their old lives and Arthur. When a train approaches, Mary-Beth gives John a copy of one of her books, "The Lady of the Manor", and the two bid farewell as she boards the train. A letter from Tilly reveals that she and Mary-Beth are in close contact and still see each other often.

Mary-Beth presents herself as a kind and good-natured woman, and while this is certainly true she is also a competent thief and scam artist.[2] Within the gang she is genuinely loving and considers most of them family. Mary-Beth is a devout bookworm, almost always seen reading a romance novel at camp, and even becomes a writer herself in the epilogue, albeit a very self-deprecating one. She's insecure about her passion and always gets shy and bashful whenever someone asks about it, calling her own books "silly".

Mary-Beth is considered the kindest and most gentle member of the Van der Linde gang. This is seen during many moments throughout the story, such as when Mary-Beth would often offer to speak with Arthur about recent events and offer him comfort on his inevitable death by his illness. Her kindness also extends towards strangers and possibly threatening figures, as seen during random events in the camp, Mary-Beth gives Kieran a cup of water while the latter remains tied up in a post after witnessing Karen taunting and mocking him. She and Kieran eventually become very close, and Mary-Beth is devastated over his death. Like most of the other women in the gang, Mary-Beth does have a soft spot for young Jack Marston, which is shown when he is safely returned from Angelo Bronte.

Mary-Beth is a young, freckled woman, with green eyes. She has brown hair which she wears in a Gibson tuck secured with a decorated hair-clip. She also has curled hair-pieces pulled over both shoulders or down one shoulder depending on the outfit she's wearing. In Chapter 2, Mary-Beth wears either a purple blouse with a white collar worn with a dark green shawl, or a green checkered shirt; which she wears together with a maroon skirt with two white stripes at the end.

Later on, she will be seen wearing her usual maroon skirt but with a sleeveless floral blouse and a turquoise festoon necklace. She can also be seen wearing the same skirt but with a red jacket, her necklace with the addition of a matching turquoise bracelet. Similarly, she can be seen in a jacket and skirt outfit, but they will be recolored to be brown and yellow, respectively; but will still include her matching turquoise accessories. She wears black lace-up boots with all her outfits.

While in Colter, Mary-Beth wears her dark-green shawl tied over her head, a black coat, grey gloves, a black belt with a gold and turquoise buckle worn over the coat, and a maroon skirt with her black boots.

In the ending credits, Mary-Beth's appearance has changed very little. However, her style has. She is seen with an Edwardian topknot with some of her hair down her right shoulder. She is wearing white pearl earrings and a dark green floral dress with her boots. Her dress with an intricate pattern and puffy sleeves, worn together with pearl earrings alludes to her success as a novelist; as it seems this career has lifted her into high-society where this kind of attire is seen. 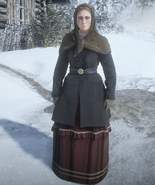 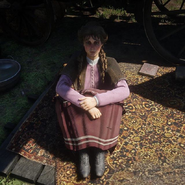 Mary-Beth in the credits

Mary-Beth encountered in the Epilogue