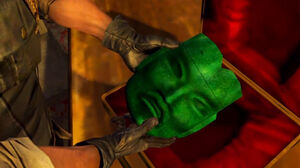 The Mask is an item found in the Red Dead Redemption Undead Nightmare DLC pack.

The mask appears to be the cause of the Undead plague in Undead Nightmare, after it was removed from the catacombs beneath Escalera by Abraham Reyes. After it is later on returned by John Marston, the world then reverts to its original state. However, it is stolen by Seth Briars sometime after 1911 which leads to a new outbreak, resurrecting the Undead including Zombie Marston.

The mask itself is made of green-colored stone, possibly jade or emerald, and appears to be an ancient Aztec design.

Abraham Reyes finds this ancient Aztec mask deep within the catacombs under the mansion in Escalera (his current residence). John Marston stumbles upon the Mask when he enters Reyes' home during "A Civilized Man". It is here that Ayauhtéotl entices him to open a case that is lying on a table in front of him, which holds the mask. 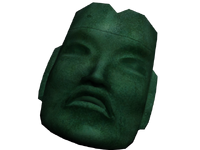 3D model of the Mask

Retrieved from "https://reddead.fandom.com/wiki/Mask?oldid=383570"
Community content is available under CC-BY-SA unless otherwise noted.