In 1907, the bridge seems to be a pedestrian bridge, as it connects to a road, and there is wood where the rails would be. The railway connection is just beginning, as the rail now connects to the bridge to the south in New Austin, but the bridge is currently being retrofitted to accommodate the railroad. It is unlabeled on the in-game map in this game, along with the nearby Montana Ford.

In 1911, It is a railroad bridge that borders West Elizabeth and New Austin, from Hennigan's Stead, north of Stillwater Creek to Tall Trees, just south of the Pacific Union Railroad Camp.

Until the player completes the Abraham Reyes mission "An Appointed Time" gaining access to West Elizabeth, Mason's Bridge will be in a state of construction and therefore uncrossable. 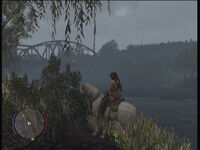 Retrieved from "https://reddead.fandom.com/wiki/Mason%27s_Bridge?oldid=392270"
Community content is available under CC-BY-SA unless otherwise noted.