View source
watch 01:50
What are Master Hunter Challenges?
Do you like this video?
Play Sound

Master Hunter Challenges are gameplay challenges which involve hunting and skinning specific animals in the single-player of Red Dead Redemption.

This challenge will be initiated simply by finding a coyote, killing and then skinning it.

This cannot be done in the Bonnie MacFarlane mission "New Friends, Old Problems", but may be done immediately after the quest.

Bucks do not count as deer. They can be distinguished by antlers and body size; the latter having no antlers and a smaller build.

Deer are most easily found in Cholla Springs.

Kill five wolves with your melee knife and skin 5 wolves

Only the killing hit counts for this challenge, so you can weaken the wolves with a gun first. The killing and skinning are separate requirements. they don't have to be the same wolves.

It is helpful to work on this challenge while riding a horse. This way, a wolf can be killed by one slice of the knife while the player is safe from attack. Also, watch out for additional wolves spawning as you skin the first set.

It's prudent, after a knife kill, to use a horse deed from your satchel: this forces the game to autosave without the need to camp or the passage of six hours. If Marston dies before saving, any wolves killed since the last save are lost and have to be done over.

A great boar spawn is on the Hennigan's Stead side of Tanner's Span railroad bridge. Be careful: it is also a cougar, wolf, and fox spawn. Use bait and an effective close-range gun like the Semi-auto Shotgun. Boars tend to only appear in the early morning and the mid-afternoon. It is very rare to have them appear at night.

Note that while the in-game description says five tusks are required, in reality kill and skinning five boars is sufficient, even if five tusks aren't collected.

Armadillos will be obliterated by high-powered weapons and thus wouldn't be able to be skinned. Use a revolver or repeater instead.

Kill 2 cougars with your melee knife and skin 2 Cougars

Like Rank 3, only the killing hit has to be with the knife. They can be weakened with a gun first. Also, the skinned cougars don't have to be the same ones killed with the knife. A very quick method to kill the cougars is to shoot them in the back just above the hind legs with the High Power Pistol. It will typically run after shot so wait until it attacks again and dodge the attack with a roll, then stab it.

While cougars are strong on the attack, they can't take much damage. Two slashes from a knife will kill them. Because of how aggressive cougars are and how close you have to get, using an expendable horse and medicine are advisable.

You can use Dead-Eye with your knife, and if timed correctly you will be immune to the cougar's attack and you'll be able to get in a slash or two before your Dead-Eye meter drains out. It is advised to have plenty of chewing tobacco and snake oil so you can quickly refill your Dead-Eye meter and repeat the process before the cougar makes another attack.

After completing this challenge, the Buffalo Rifle becomes available for purchase from any Gunsmith.

All these animals can be found around Beecher's Hope. Start at dusk and ride around inside the perimeter fence.

Skunks and Raccoons can be easily found riding around Warthington Ranch at night.

Elk can only be found in Tall Trees, usually quite deep in, past Manzanita Post, or near the river. They also spawn up where it snows. Look out for wolves, bears and possibly boars when searching for them. They can be killed in any way.

Bighorn sheep can be found in Tall Trees, usually near where the railroad meets the trees, to the south-west of Manzanita Post. They can also be found in New Austin in the northern hills, east of Rathskeller Fork.Watch out though, as that is also where cougars, snakes and wolves may spawn. They can be killed in any way. Bighorn sheep are known to appear in large numbers in the Twin Rocks gang hideout upon "overkilling" successive completion of clearing out these bandits.

Like Rank 3 and 5, only the killing hit counts for this challenge. The killing and pelt collection are separate requirements. They don't have to be the same bear.

Use the same technique used to kill the cougar, though it takes three or four body shots to weaken a Grizzly. Then, Lasso the bear after several body shots. When letting it go, the bear will run. This will give the opportunity to knife it without being attacked, though the bears are fast, making it difficult to chase them on foot. Try to use a horse for extra speed.

Before using the knife for the finishing blow, suggested weakening techniques include:

Once the bear has been weakened, it's still no easy job to knife it. When it is charging towards you, target it with a knife and then roll out of the way once it gets too close. This is also a good way to kill other animals with a knife. Also, if possible when trying to knife the bear, hang back a bit and it will soon go onto its rear legs and stand up. This means that it cannot turn around as fast, which then gives the opportunity to go behind it and slash it.

If players are lucky enough to encounter only one bear at a time, lasso it when it is near. The bear will be temporarily stunned, allowing time to switch to a knife via the start menu and slash its side a few times.

Bears can't enter buildings, so you can hide in a cabin at Bearclaw Camp when a bear is chasing you. The bear cannot come in, and you should be able to kill it without it being able to kill you.

Bears chasing NPC's in random encounters will ignore you while the NPC is alive, so that is a convenient time to attack.

Another way of killing the bear is shooting it a couple times then on horseback using your melee knife to kill it.

One convenient method of completing the challenge is to wander around the woods of Tall Trees immediately to the west of Beecher's Hope to trigger the spawning of a bear. Then, catch the bear's attention and lure it back to Beecher's Hope while on horseback. Once inside the boundary fence, bears become far less aggressive, preferring to run away rather than attack, meaning you can weaken it with a few rounds and then finish it off with the knife without too many problems. It might knock you down occasionally, but it will leave you alone long enough to recover, unlike out in the wild. The other advantage to this method is there isn't the risk of another bear spawning nearby to take you by surprise.

The easiest way to attain this rank is to wait for the mission "At Home with Dutch". A bear is encountered a few steps up after starting to climb the rocks. Shoot it three times with the Bolt Action Rifle, lasso it, then stab it. It has limited space so is easy to kill and no other animals will attack. Also, circling the tree at the back of the clearing can give you extra stabs at the bear, without the risk of it charging and mauling you.The checkpoint can be restarted if the bear kills you. To make it even easier, shoot and kill the bear ouright, climb to the next checkpoint, killing the cougar then commit suicide. Restart from checkpoint and go back down the path to the bear. It is completely docile and will not attack even when being punched.

Search Ojo Del Diablo for "Khan", the legendary jaguar and collect his pelt

When you encounter Khan, text will appear on the screen and he will appear as a red mark on your HUD.

As in the previous challenge, when you find a legendary animal, text will appear on the screen and it will appear as a red mark on your HUD.

Legendary animals tend to show up promptly upon entering their spawning zone.

If you kill one of these targets but don't collect the pelt, you can try again later. They will respawn. Also, if the carcass is lost into deep water, the pelt and other collectibles may be automatically added to your inventory. 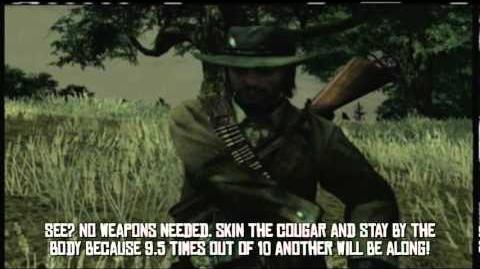 Completing the Master Hunter Challenges contributes to the following Trophies/Achievements: