Pistol Ammo
“Fully automatic German pistol. Chambers some very powerful ammunition, and a lot of it. Hold the trigger for rapid fire.”

The Mauser Pistol is a pistol featured in Red Dead Redemption.

The Mauser Pistol is one of four pistols in the game, alongside the Semi-automatic Pistol, High Power Pistol, and Volcanic Pistol. It is also one of the five rare weapons that must be obtained in order to reach 100% Completion in the game (each weapon contributes 0.5%). 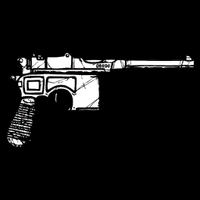 The Mauser pistol, as seen in the player's inventory 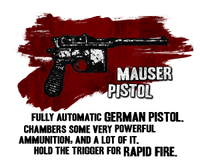 Rockstar's description of the Mauser pistol

John after purchasing a Mauser Pistol

The Mauser Pistolcan be used to unlock the following Trophies/Achievements.

Retrieved from "https://reddead.fandom.com/wiki/Mauser_Pistol?oldid=391087"
Community content is available under CC-BY-SA unless otherwise noted.