Meteor House is a location in Red Dead Redemption 2 and Red Dead Online, in the Roanoke Ridge region of the New Hanover territory.

This location is situated east of Brandywine Drop and north of Roanoke Valley.

The Meteor House is a cabin on a cliff that overlooks Roanoke Valley in Roanoke Ridge, New Hanover.

This point of interest features a stone cottage and a small outhouse behind it. Surrounding the house are things such as a shovel, a bundle of firewood, barrels and other gardening tools. The property is encircled by a wooden fence.

Although the cottage appears normal from the outside, the inside is very different. A broken dining table, a collection of human remains, a hole in the roof and floor and a broken support beam show that a meteorite crashed into the cabin while the inhabitants were eating a meal. The dent in the floor emits a plume of grey smoke into the air, surrounded by blood, two severed legs, intestines and a chunk of flesh. 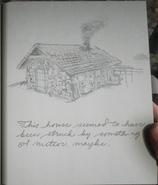 Arthur's drawing: "This house seemed to have been struck by something. A meteor, maybe." 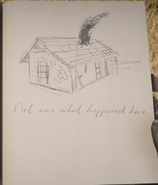 John's drawing: "Not sure what happened here."