Meteorite is a points of interest in Red Dead Redemption 2.

It appears that a meteorite has crashed in Roanoke Valley. The land around it is deformed by its impact, with trees flattened in a circular pattern around the meteorite itself. This creates a vaguely unsettling atmosphere, as does the thought that such a large hunk of stone once lingered among the stars. Despite the potential wealth of minerals that are sometimes found in meteorites, no one seems to have yet staked a claim to this particular one, even though a newspaper article announced widely about it. 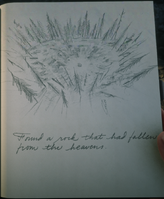 Arthur's drawing: "Found a rock that had fallen from the heavens." 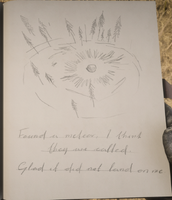 John's drawing: "Found a meteor, I think they are called. Glad it did not land on me."