Red Dead Wiki
Register
Don't have an account?
Sign In
Advertisement
in: Factions in Redemption, Factions in Undead Nightmare
English

In the Redemption's multiplayer mode, the Mexican Army does not have a section in the Outfitter. However, two soldiers, Jose Rodriguez and Juan Vargas, appear in the Miscellaneous Mexicans section.

The Mexican Army (Spanish: Ejército Mexicano) is the land branch, and the largest of the Mexican military services; it is also known as the National Defense Army. The motto of the Mexican Army is "Siempre leales", which translates to "Always loyal". It is seen to be very corrupt and brutal, with soldiers and officers alike displaying no qualms about raping women, killing defenceless civilians and razing buildings to the ground in an 'end justifies the means' attitude to war.

As of 1911, the Mexican Army in Nuevo Paraíso is controlled by Colonel Allende and overseen entirely by the country's president: General Ignacio Sanchez.

The Mexican Army is only mentioned in newspapers in the game, but it is implied that they are patrolling the border between Nuevo Paraíso and New Austin closely due to escalating tensions between Mexico and the United States.[1]

While no soldiers physically appear in the game, if the player attempts to directly cross the San Luis River, they will be immediately shot and killed by an unseen sniper.

During his hunt for Bill Williamson and Javier Escuella, John Marston hopes that the Mexican government will help him to find the two criminals. In Escalera, John comes across Vincente de Santa - a Captain in the Army who promises to talk to his superior, Agustin Allende, about finding the two men in exchange for help in fighting off the rebels in the ongoing revolution. Marston goes on to assist De Santa in saving an Army train from a rebel posse, and when they are successful, the Captain tells him to visit Governor Allende's mansion in Escalera again.

Marston soon comes across De Santa and the Mexican Army again, along with Allende. As De Santa had previously suggested, Allende promises Marston that, in return for his help in the war, the Army will find Escuella and Williamson for him. Marston is thus forced to work with the Army, and is sent out with De Santa to help with an attack on the village of Tesoro Azul, where he is introduced to another Captain and rival of De Santa's - Espinoza. Disgusted at the Army's enjoyment and burning down homes, Marston has no choice but to reluctantly take part. Later on, Marston is promised 20,000 pesos and information on Escuella's whereabouts for helping the Army at Torquemada.

However, while working with a once-known gunslinger, Landon Ricketts, Marston begins simultaneously working against the Army. He and Ricketts rescue a young rebel named Luisa Fortuna from incarceration, and later free rebel prisoners and bring them over to America. Through his contact with Luisa, Marston helps her sister to bypass Army checkpoints to reach America, and even saves the rebel leader and Luisa's supposed lover, Abraham Reyes, from execution. Marston is also sent on a mission by De Santa, in which he and Espinoza are sent to escort a train through rebel lands. By the end, both Marston and Espinoza are suspicious at how few men they were given, suspecting that De Santa sent his two least favourite men on a suicide mission.

Marston is later informed by De Santa that the Army has captured both Escuella and Williamson, and are holding them in a church in Chuparosa. When Marston gets there, he is ambushed and held at gunpoint as a result of the Army discovering his duplicity. Before he can be executed, however, Reyes and his rebels turn up, with Reyes personally saving Marston. A battle erupts in the town, resulting in the Army's defeat and the death of Espinoza at the hands of Marston. John fully aligns himself with the rebels, on the condition that Reyes finds Escuella and Williamson. Marston resumes contact with Luisa and participates in her revenge attack on the Army for her father's death, and also helps Reyes with a robbery of a Mexican Army train.

Luisa asks Marston to join the rebels in killing De Santa. They find him at Sepulcro, and after an interrogation for Escuella’s whereabouts, De Santa is shot dead by either Marston or the rebel mob. They then go to Casa Madrugada, where De Santa said Escuella would be, but find out that it’s a trap and kill the soldiers there. Abraham Reyes later says that he has found Escuella, taking his rebels and Marston to El Presidio. After a battle with the Mexican Army in which the rebels emerge victorious, Marston successfully manages to either kill or capture Escuella. With only Williamson and Allende remaining, Reyes asks Marston to go to Escalera for a final showdown with the Army.

A short while later, Marston goes to Escalera. After witnessing one rebel being killed via a firing squad of Mexican Army soldiers and fighting all-around, he comes across the captured and beaten Abraham Reyes. Luisa then appears with a knife and charges at the soldiers, only to be shot in the chest simultaneously by all three. Marston manages to shoot two of the soldiers, but fights the last, Raul Zubieta, in a duel. Major Zubieta is subsequently shot dead, resulting in Reyes’ release. After Marston frees rebel prisoners from the cells, the rebel army launch an attack on Allende's villa. They successfully fight off the Mexican Army soldiers who guard it, and then break in; Allende and Williamson are seen escaping to the former's private stagecoach, so Marston and Reyes give chase. After its guards are shot dead by the pair, Allende surrenders and pins Williamson on the ground with his foot. Both men are subsequently gunned down by Marston or Reyes, prompting Reyes to bow in celebration and claim that Mexico is his.

The rebels take control of Nuevo Paraíso and replace the Federales and the Mexican Army as the region's law enforcement. However, the Mexican Army can be found at El Matadero and Torquemada. Additionally, the Mexican Army only pursue the player when they are wanted if their bounty is over $1000, instead of being the default pursuers if the player's bounty was under $1000 like they did prior to Allende's death.

Nationally, Reyes and his rebels usurp the country after defeating the Mexican Army at Mexico City. This results in Reyes becoming the president and end of Ignacio Sanchez's time in power. Sanchez's fate is uncertain; newspapers report that he either died in the fighting or fled the country to live in exile.

The Mexican Army will attack the player if they commit a crime in Mexico, with Casa Madrugada being the only exception - as it is controlled entirely by the Banditos.

In Undead Nightmare, Mexican Army soldiers can be seen defending El Presidio. A group of survivors can be seen inside the fort, being protected by the soldiers. Some soldiers will put up Missing Persons posters. They can also be found among the stranded survivors in El Matadero and Torquemada.

Javier Diego used to be a General in the Mexican Army. It's unknown wheter he was discharged from the army or simply left. Shortly thereafter, he formed his own military group, the Renegade Army, which included numerous Mexican soldiers, in addition to mercenaries and soldiers of other nationalities. 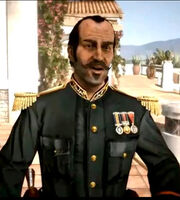 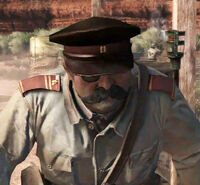 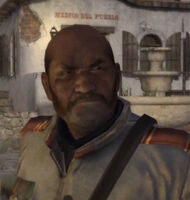 Captain Espinoza and his men assault the village of Tesoro Azul

Captain De Santa outside the villa at Escalera

Captain De Santa and his men talk to John Marston 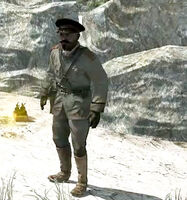