“We have already been ambushed. Our squad is made up of new recruits and the two men De Santa hates the most. I think it is right to be anxious.”

–Espinoza about his and John's mission

Mexican Caesar is the twenty-ninth mission in Red Dead Redemption.

As John Marston arrives, Captain De Santa and Quique Montemayor are forcefully moving women along, meant for the sexual entertainment for Colonel Allende. Marston is then told that Bill Williamson and Javier Escuella are riding with the Rebel leader Abraham Reyes.

Allende wants Marston to escort a train a train all across Nuevo Paraíso, a dangerous job, in exchange for 20,000 pesos and information about Escuella. Marston, of course, accepts. However, Allende does not provide Marston with the money after completing this task.

You'll have to ride shotgun in the cart, which will take you to Chuparosa.

After some time, the convoy will be attacked by rebels coming from the right. There will be two waves of three riders, and you have to kill them before they kill any of the Mexican soldiers, or else you will have to restart from the checkpoint.

After fending off the ambush, there will be a period where the man riding the cart will say that the soldiers are new recruits and imply that this mission might be a set-up from the inside. As you make another turn, three rebels will shoot at you from the hills above you on the left and right.

After this last attack, you'll just have to wait until you reach Chuparosa. Get off the cart and follow the captain to the Train, where he'll tell you to man the Gatling Gun during the Train ride. During this mission, you will not only have to make sure the rebels don't blow up the train engine, but also avoid getting killed yourself. After about a minute, the rebels will start attacking on horse from both sides of the Train.

After fending off the first wave, you'll reach Las Hermanas, where some rebels will be waiting at the station. Rebels will also still come, constantly, on horseback from both sides. Upon exiting the tunnel after Las Hermanas, some will probably make their way onto the train, in which case you will have to shoot both at the car right behind you and at the horses still coming in from the right and the left. Beware of the rebels who will go up to the front car and start shooting at the engine — sometimes, once they get up there, they can be hard to hit.

Once you start going uphill, just south of Brittlebrush Trawl, there will be rebels with guns and Molotov cocktails waiting in the hillside to the right. Keep the gun level while shooting, as this is the only way you'll get them all.

After this, you will have to ride the train all the way into camp. When the train stops, get off and join the Base Commander, who'll want to talk to you, and thank you.

De Santa "Just a little recruitment. Nothing for you to be concerned about."

"Our customs are none of your concern."

De Santa: "These two patriots were keen to make your acquaintance, Coronel."

"Fantastic! I love patriots! Hey, Señor Marston! You here to fight the war? At least we'll make a patriot out of you yet."

Marston: "I hope so. Any word of those men?"

"Ah, yes. I heard that they were riding with Reyes. I wanted to talk to you about it."

"His excellency, El Coronel, would like to employ you in escorting a train down rebel country."

"The job is dangerous, but you'll have the honor of..."

"Of knowing that you served Mexico in her fight against forces that would destroy our society."

"How much you offering?"

De Santa: "20,000 pesos and information as to the whereabouts of Javier Escuella."
Marston: "Okay, then."

"She has a funny way of showing it."

Espinoza: "I do not think we have seen the last of the rebels."

"New recruits can't win a fight like this. I need you to man the gatling gun."

"I ain't the soldier here, Captain."

"Do not question me, gringo. Just do as I say."

"Señor Marston! Thank you for your efforts. The escort was a success."

"At least some of your men survived."

"I didn't think to survive myself."

"My whole life I have dreamed of a glorious death."

"These socialist pigs cannot be allowed to win." 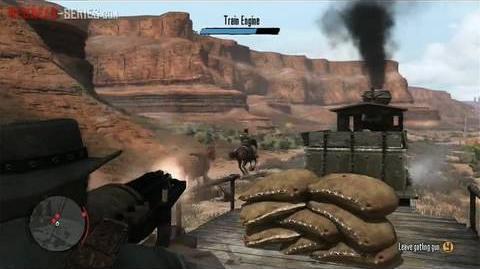 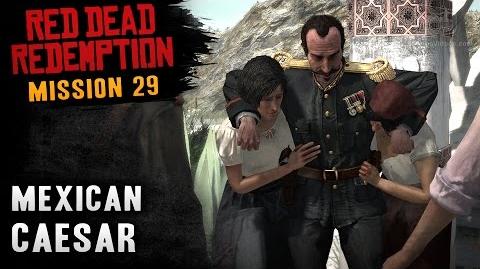