Micah's Revolver is a weapon featured in Red Dead Redemption 2. It cannot be customized.

One of the twin revolvers used by Micah Bell, this custom Double-action Revolver features a grey steel frame with a custom red-and-black skull grip. It also has “Vengeance is hereby mine” hand etched into the side of the barrel. This weapon has an ammo capacity of six rounds, being able to use Regular, High Velocity, Split Point, Express and Explosive revolver ammo.

This revolver is available if the player returns to the shootout location after "American Venom" atop Mount Hagen and loots Micah’s frozen corpse.

Micah's Revolver can be acquired early, during the mission "Old Friends" in the first chapter. During the shootout with the O'Driscolls, the player should disarm one of them and lead him to Micah. If this happens, the O'Driscoll will wrestle the gun from Micah and cause it to be dropped on the ground, where the player can pick it up.[1]

Alternatively, the player can obtain it immediately before initiating the mission "Blessed are the Meek?". Once the player has the law searching for them after committing a crime, they should go to the sheriff's office in Strawberry and head downstairs to the jail area. Here, the player should shoot a fire arrow through the gap in the bars so that it lands near Micah's left foot. If this happens, Micah will drop the weapon near the cell's wall, allowing the player to obtain it.

There is only one slot in the weapon inventory for Micah's Revolver, so if one is already in the player's possession, another one cannot be acquired. 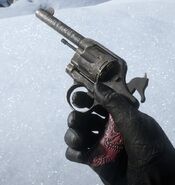 A close-up of Micah's Revolver

Micah's Revolver obtained before initiating the mission "Blessed are the Meek?"
Add a photo to this gallery

Retrieved from "https://reddead.fandom.com/wiki/Micah%27s_Revolver?oldid=385819"
Community content is available under CC-BY-SA unless otherwise noted.