Miss Marjorie is a minor character featured in Red Dead Redemption 2. She initiates the stranger mission "The Smell of the Grease Paint".

Miss Marjorie is a performer and works with Bertram and Magnifico. Promoting their side-show of freaks, she is the leader of the group and is responsible for the group's finances.

Miss Marjorie is first encountered at Old Light Saloon at the Van Horn Trading Post, trying to get Bertram to tell her where Magnifico is. She's in need of help to find Magnifico and bring him back. After Magnifico is found, Marjorie and Bertram appear, and Marjorie confronts him. She is last seen when the trio leaves, heading to their next show in Saint Denis at Théâtre Râleur. The player is rewarded with a part of the gate for that show ($40 in a letter), and that is the final time she communicates with the player.

Miss Marjorie is shown to have a differing views towards both of her associates, and the player themselves.

With Bertram, she acts like a caring mother towards him, teaching him how to behave in public and telling him to stop. After the player ended up fighting and winning a duel with Bertram, she starts to comfort him.

Her relationship with Magnifico is rather negative as she often calls him various vulgar words, and calling him out for having ran away from the group and robbing them. After Magnifico attempted to embarrass her during the performance with his magic, she begins using a whip to attack him.

For the player, she's positive towards them, rewarding them for their troubles.

Marjorie wears a white shirt, and a bowtie attached to the neck of it, and a long black skirt, with a brown belt holding it. She has blonde hair, and her cheeks are red. During her performance, she wears a blue and white dress with noticeable gold decorations on it, on her left arm is a purple flower wreath. 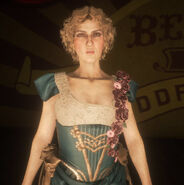