Red Dead Wiki
Register
Don't have an account?
Sign In
Advertisement
in: Mounts in Redemption 2, Mounts in Online
English

The Amber Champagne coat can be found at the Scarlett Meadows stable, while the Silver Dapple Pinto can be found at the Blackwater stable. Both have a high base value of $950. Missouri Fox Trotters are a cross between a race and work horse, so they have moderate attributes and a higher speed. Its handling gives it moderate reactivity and agility.

The Missouri Fox Trotter is a gaited breed especially suited to working with livestock. However, their muscular build makes them suitable for ranch work, trail riding, and racing. With a graceful carriage, they are relaxed and exhibit poise but have lightning fast speed and acceleration when needed. This is a fantastic horse worth twice the price.

The horse of Micah Bell throughout 1899. Baylock has a "Black" coat and, with his black body and white face, he is strikingly similar to the Dark Horse from Red Dead Redemption. Given that the Dark Horse only appears if the player's Honor is low, it is almost certainly no coincidence that Baylock is almost identical, given Micah's immoral nature and acts of villainy.

Despite his looks, and the true nature of his owner, Baylock will actually start out being less aggressive and standoffish than most of the other gang members' horses, and will let the player ride him in Chapter 2 while Micah is in jail. He will be unsaddled in camp, and while it possible for the player to saddle him themselves, it is impossible to bond or stable him without glitches. In the meantime, however, the player can ride him as much as they want until Micah is rescued as Baylock will then return to him.

However, when this happens, Baylock's condition and behavior will start to deteriorate. His cores will be partially drained, and he will appear to be dirty-in stark contrast with the rest of the gang members' horses. He will also stop being friendly and refuse to let the player touch him, let alone ride him. He will also kick the player if they pester him too much. This suggests that despite Micah's unusually good-natured comments about Baylock, he actually neglects and abuses him, and that Baylock was only healthy and friendly in the beginning because Micah wasn't there to mistreat him.

Baylock vanishes with the rest of the remaining gang member's horses after the events of the main story, and it is impossible to obtain a horse that looks identical to him anywhere in the game. 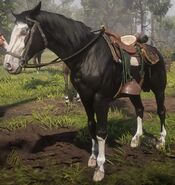 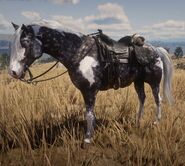