Red Dead Wiki
Register
Don't have an account?
Sign In
Advertisement
in: Characters in Redemption, Bounty targets in Redemption
English

Mo van Barr is a minor character and a bounty target featured in Red Dead Redemption.

Marston has a choice to kill or capture him to continue with his quest for the Deadly Assassin Outfit.

His wanted poster is on the South side of the Southwestern Railroad Company building in Armadillo. He is wanted for assault and is part of Walton's Gang.

Van Barr Poster Does Not Appear

The "Mo van Barr" glitch is a huge obstacle to people trying to get their pre-order bonus of the Deadly Assassin Outfit. One of the requirements to unlock this outfit is to find and capture/kill Mo van Barr. For some gamers Van Barr isn't showing up in the wanted posters, though you can keep collecting bounties and it might be possible you can get him later but won't be able to tell from the poster that it's him; not sure though, for others he escaped during the wanted mission never to re-appear for the rest of the game. While others downloaded the Deadly Assassin Outfit after killing Van Barr, therefore "putting the cart before the horse" and killing the target before he was eligible to be killed for the outfit. Another known issue is when you finally get him to appear, and you manage to catch him (or kill him) and you get no Deadly Assassin Outfit scrap.

For those gamers that are unable to get Mo van Barr to show up in wanted posters, players have noticed they can spawn Mo van Barr by starting a new game. Complete Bonnie MacFarlane's missions up through "Wild Horses, Tamed Passions". Make a save and initiate Marshal Johnson's first quest: "Political Realities in Armadillo". In this mission, you must capture or kill Walton Lowe, kill him. When you get back to town, Mo van Barr's bounty may be the first one posted. Leaving Walton alive seems to prevent Mo van Barr's bounty from showing.

Alternatively, you can start Marshal Johnson's first mission anytime without completing all of Bonnie MacFarlane's missions. All you need to do is complete her second mission "Obstacles in Our Path" to get the Marshal's first mission. Then, initiate "Political Realities in Armadillo" and kill Walton Lowe.

Sometimes it's possible to get the Scrap for the Deadly Assassin's outfit by simply playing a Bounty Mission in Armadillo after you've downloaded the outfit. If you've already done all the Bounty Missions, a wanted poster will show up in Armadillo with a question mark after you've downloaded the outfit. If you complete these bounties, one of them may end up being Mo van Barr, which will update your outfit scrap completions. 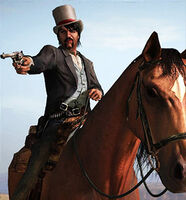