Town of Valentine in The Heartlands, State of New Hanover

A resident of Valentine, Moira is a married woman who is having a romantic affair with Sheriff Curtis Malloy.

She is seen briefly when Arthur Morgan brings in Benedict Allbright, where she is talking to Malloy. Their conversation is awkwardly cut short when Arthur enters.

At some point, the player can hear an argument between Malloy and Moira on the second floor of the sheriff's office. Moira tells Malloy that she wants to break up their romantic relationship and insults him when he protests. Sounds of someone being strangled can then be heard in the room and Moira is not seen again; it is likely that Sheriff Malloy murdered her. 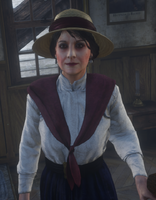