Molly was born into a wealthy family in Dublin, Ireland. She came to the United States searching for adventure, eventually joining Dutch van der Linde and his gang at some point prior to 1899. She and Dutch later became lovers.

In Colter, she is seen escorting Dutch to his room, and stays with him throughout the chapter. If Arthur asks Molly if she would like to stay with the others for company, she refuses, saying: "Dutch is all the company I need".

Molly can be found around camp, but she never participates in any camp chores or finding a lead to make money. In the third chapter, she wants to speak with Arthur about Dutch, but Uncle interrupts them with information about a potential robbery. Later, after the gang relocate to Shady Belle, Molly asks Dutch to speak to her, but he declines on the assertion that he is too busy.

While some of the gang are in Guarma, she disappears for a lengthy period of time, with many saying that they haven’t seen her.

Immediately after relocation to Beaver Hollow, Uncle returns with a drunk Molly, who he allegedly found in Saint Denis. Molly begins to rant about Dutch ignoring her, stating that she loved him, and sarcastically calling him "the Lord God almighty". Molly then proceeds to tell everybody that she informed the Pinkertons about the gang's planned bank heist in Saint Denis. Furious, Dutch immediately pulls out his revolver, but Arthur attempts to stop him by claiming that she is a "fool" who isn't worth his time. Before any more can be said, Susan Grimshaw shoots Molly in the stomach with a shotgun, killing her instantly. Grimshaw states that "she knew the rules", and subsequently orders Pearson and Bill Williamson to burn the body.

Most of the gang members believed Molly got what she deserved. The only people who were truly shaken by her death were Karen Jones and Mary-Beth Gaskill. Immediately after Molly's death, a scene between Karen and Susan may occur where Karen accuses her of being a murderer, before renouncing Molly's guilt. Later in the chapter, Mary-Beth can be seen conversing with Tilly Jackson, expressing her grief by telling her that she "can't get over" Molly's death and that she was simply a fool in love who "would say anything".

It is later revealed by Agent Milton that the rat is in fact not Molly, but Micah, who was feeding information to the Pinkertons. Milton tells Arthur that, while he spoke with her a few times, she did not say anything of value and merely left them with more questions than answers.

Molly is considered stuck-up and entitled by the other women in camp, especially Karen, which is mainly due to her disdain for others and her refusal to do any work inside or outside of camp. Molly has made a point of saying she's not interested in chores or what she perceives as lowly work; When Arthur asks if she'd like to join the other girls in cleaning around the camp, she responds with "I'm nobody's servant girl, Mr. Morgan." This attitude is also reinforced by the fact that her character model is never seen doing work around camp, unlike the other girls who can sometimes be found doing laundry or other activities. It is unclear if the men in camp share a similar opinion of her, the only exception being Sean who is unimpressed with her attitude and high class background, calling her a "snotty nosed little West Briton" on one occasion.[1]

Additionally Molly also has characteristics of vanity and narcissism; she can often be found primping herself in her compact mirror, wears various forms of makeup such as lipstick, and takes pride in her appearance. She may also be superstitious, as she asks Arthur whether her grandmother was right in saying that her broken mirror means seven years of bad luck, before asking him to get a new pocket mirror for her.

Molly's mental state declines throughout the game, seemingly due to a combination of Dutch's neglect, the indifference of the other gang members, and the fear of the encroaching law enforcement. As such she becomes increasingly unwilling to socialize with others, often saying: "I need to be alone" or "I'm not much company" to Arthur if he tries to converse with her. Arthur will say on some occasions that he thinks Molly is "losing it". After Kieran and Sean both die, she becomes visibly hysterical and asks Arthur "How is any of this okay?"

She becomes somewhat paranoid about others talking negatively about her. In one instance she can be heard saying things such as: "them out there, they're all laughin' at me", for example. She also believes that the gang disregards her, which is evident in the way that Dutch, Arthur, and Uncle do on various occasions in cutscenes. Molly at one point confronts and accuses Karen of talking about her behind her back, instigating a fight which results in her slapping Karen, and Karen retaliating by punching her in the face. Karen makes a point of saying "Dutch or no Dutch", she will kill Molly if she gets physical again.[2]

Dutch seemingly losing interest in Molly is however the biggest cause of Molly's deteriorating mental state. There will be more and more instances of them fighting as time goes on, often with Molly accusing Dutch of sleeping with other women behind her back. Molly at one point begs Abigail for advice on their relationship and Abigail point blank states that she believes Molly is "sweet" but "not stupid" and that she should realize that Dutch does not love her, at least "not the way you want to be loved", insinuating she believes Dutch is only interested in sex. This upsets Molly quite a bit who tries to tell Abigail it's "not like that", but Abigail retorts with "It is like that." Although Abigail is brutally honest, she does express several times through the confrontation that she does not wish to see Molly "make a fool of herself" and tells her to "take care of herself", but this does not seem to leave an impression on Molly who gets frustrated and runs away. Molly also tries to approach Arthur regarding Dutch, but is interrupted before she can speak.

At the party held after Jack is rescued Molly will attempt to approach Dutch and ask him to talk and will be harshly turned away, resulting in her running away into the Shady Belle and not joining in the festivities. Her relationship with Dutch is ultimately also the reason she has a meltdown and is killed.

Molly is a young woman with stereotypical Irish features of red hair, green eyes, and freckles. Compared to the other women, she wears a lot of make-up, sporting red lipstick and eye-shadow. Her hair is half-tied up, while the rest of her red curls drape freely down her back. Molly most commonly dresses in a corseted, low-cut, green top (similar to a Swiss Waist or Victorian Dirndl) with a golden-gilded pattern and trim, with matching golden jewelry, as well as a red skirt and white boots. Just like other gang members, Molly often changes her attire and hairstyle. 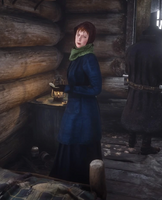 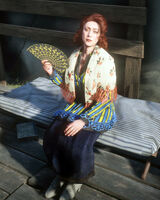 Molly with a cigarette 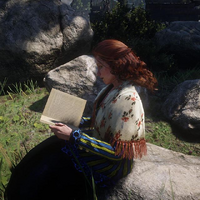 Molly in her knickers 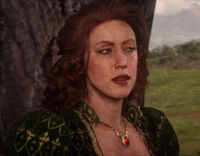 Molly during "An Honest Mistake"