Leopold Strauss wants the player to collect two debts, one from J. John Weathers and another from Arthur Londonderry.

Arthur finds Weathers at Three Sisters and demands the debt from him, but Weathers doesn't have any money. Weathers offers Arthur his wagon supplies, which is meant to last through the winter. However, a number of US Army soldiers arrive to kill Weathers, who deserted from the army. Arthur helps Weathers fight off the army, then his wagon, which had caught fire, is engulfed by the flames and the supplies are destroyed. Weathers tells somebody they can come out, and it's revealed he is with an Native American woman who is pregnant, and Arthur laments that he should've just helped him fix the wagon. Weathers offers Arthur a silver locket to pay the debt, and Arthur can either take it or absolve the debt. Afterwards, Arthur tells the man to get the woman somewhere safe, and he rides off.

Arthur then arrives at the Annesburg mine to find Londonderry. However, the foreman reveals that Londonderry has died, exclaiming "You're too late. Arthur's dead!". He tells Arthur he should check with his widow, Mrs. Londonderry, and Arthur leaves to find her. He finds her at her house in Sawbone Clearing with her son, and she tells him that they have nothing to pay him with, and asks him if he wants her son's shoes, the food they eat, or if he wants her to sleep with him. She tells him that Londonderry worked himself to death to pay his debts and now they're about to lose the house. Arthur can absolve the debt or absolve the debt and give her money. She thanks him, but also tells him they should not be doing this to people. As she walks into the house, Arthur apologises.

Feeling guilty and angry at being used by Strauss, Arthur rides back to camp and confronts Strauss, packing his bag and telling Strauss he won't kill him, but that he probably should. Arthur tells Strauss that he disgusts him and states that he embarrasses the gang, "If we can be embarrassed any further". Strauss is shocked and says that "the sick delude themselves". With the camp watching, Arthur gives Strauss money and forces him to leave. If Arthur's honor is low he will be more self serving, angry at him for wasting his time. If Arthur's honor is high he will be angry at Strauss for how he had damaged the lives of the people he gave loans to and will tell him that they are not decent men, but that the people who took the loans were. 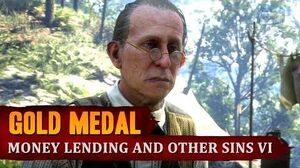