He appears to have been the uncle of the young woman John Marston meets when he is searching Blackwater for survivors of the plague. The woman advises Marston to burn the undead at the cemetery where Mordecai is buried, telling John to burn her uncle "real good" and put an end to the infected rising from the grave.

Mordecai appears in the Blackwater Cemetery after Marston has burned a few of the coffins and killed several undead. Marston will have to kill him in order to complete the mission "Curious Tales from Blackwater, USA". 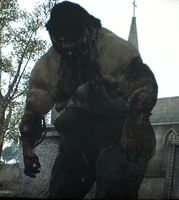 Retrieved from "https://reddead.fandom.com/wiki/Mordecai_Robbard?oldid=354508"
Community content is available under CC-BY-SA unless otherwise noted.