Marston finds her hiding in the Tailor's shop. She is hiding from the Undead and is visibly frightened. She claims that her mother killed her father - despite the fact that her mother had died of smallpox three years earlier.

She is the first to suggest to Marston that the dead have come back to life. She proposes that he go and burn out all of the corpses in the Blackwater cemetery. John asks if she would like to come with him, but instead, she gives him a Torch and decides to remain behind, stating that she has seen enough of her formerly dead family members. 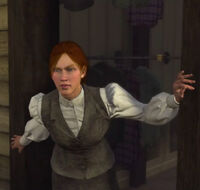