Red Dead Wiki
Register
Don't have an account?
Sign In
in: Mounts in Redemption 2, Mounts in Online
English

Standard
The Morgan is a horse breed in Red Dead Redemption 2.

Morgans tend to be very common, so they have low attributes. Its handling gives it moderate reactivity.

Morgans are classed as riding horses. They can be identified by their smaller frame, refined build and elegant gait. All coat types can be stolen or tamed from the wild, while the Bay Roan can be purchased from the stables. The Palomino can be bought from the Amos Levi Blacksmith & Farrier stable in Valentine, though only during the mission "Exit Pursued by a Bruised Ego", and for a much cheaper price of $15 compared to the usual $55.

Morgans are known for having poor health and Acceleration; their Speed and Stamina are average, making them suitable for shorter journeys. Due to their small size, Morgans are extremely agile and maneuverable despite only having Standard handling. This makes them useful in dense forests and narrow mountain trails.

Sturdy and alert, many a rider has claimed to have a bond with their Morgan like no other breed. Their heads are chiseled, the eyes large and expressive. Their jowls are well rounded, the nostrils large. The legs are straight and sound with short cannons. They are obliging and, while their speed is low, they are excellent at driving in single or multiple hitches.

Jeremiah is a Flaxen Chestnut coat and is much bigger than any other Morgan found in the game. He is owned by Duncan Geddes, and can only be encountered in the mission "Fatherhood, For Beginners" at Pronghorn Ranch. 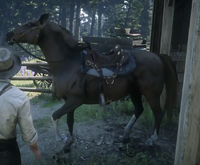 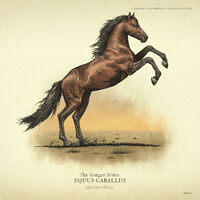 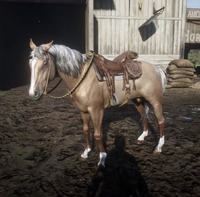