Morgan is a lawman who operates in and around Blackwater.

Morgan is seen during the mission "At Home with Dutch". After John Marston climbed to the top of the mountain surrounding Cochinay, he witnessed Morgan being dragged out of a tent and then shot in the head by Dutch van der Linde.

Despite this, Morgan can still be found patrolling Blackwater. However, if Marston has a bounty, Morgan will track him to multiple locations around West Elizabeth. He is also the lawman who pays Marston at the end of Nightwatch job. 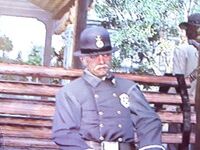