Red Dead Wiki
Register
Don't have an account?
Sign In
Advertisement
in: Characters in Redemption, Characters in Undead Nightmare
English

Moses Forth is a minor character featured in Red Dead Redemption.

Moses is an old friend of Seth Briars, and both are known grave-robbers. However, Moses was apprehended by law enforcement because it is believed he is solely responsible for the grave robberies throughout New Austin.

Moses is first encountered in police custody during the mission "Exhuming and Other Fine Hobbies". Prior to his arrest, he and Seth had carried two halves of a map that was supposed to lead to a hidden treasure. With the help of John Marston, Seth frees Moses and threatens to cut him with a knife unless he reveals the location of his half of the map. After revealing the map part is at Odd Fellow's Rest, Seth was disappointed about not getting to kill him, before noticing Moses has urinated in his pants. 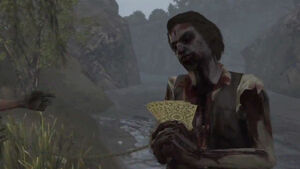 In Undead Nightmare, Moses is Undead and can be seen at The Old Bacchus Place 'playing cards' with Seth at the beginning of the mission "Get Back in That Hole, Partner" and at the end of this mission, 'dancing' with a female Bruiser that Seth had given the name "Francine". 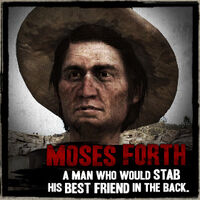 "I think you've gone and pissed yourself, Moses." 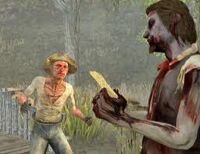 An undead Moses Forth and Seth Briars playing cards.