“México is an old country. Many faiths have lived and died here. Many evil spirits have flourished. I have no idea what is afflicting the people here, but I know it is a sickness of the soul.”

As Marston approaches Las Hermanas, he finds the Mother Superior being choked by one of the Undead at the train station there. She puts up a struggle before breaking free of the zombie and then manages to shoot it in the head, saving herself. Though the killing was self defense (and the person was already dead) the Mother Superior can't help but think that she's committed a mortal sin. John suggests she chalk it up to self defense.

Reluctantly she accepts this shift in perspective, but begins worrying that the rest of the Nuns in Las Hermanas might not be able to cross the line as she, and implores John to help them by clearing the convent of the Undead.

Before this mission becomes available the player must complete:

Clear out all of the undead from Las Hermanas. The player can kill the undead themselves or provide ammo to survivors in the convent. Be careful when climbing to rooftops at the front entrance as knocking off a survivor will make them hostile.

Ride out and find a common Undead, as opposed to a Bolter, Bruiser or Retcher, hogtie it and return it to the Mother Superior in Las Hermanas.

Eliminate the undead at Sepulcro and cleanse the graveyard. Burn all of the coffins indicated by the yellow dots and when the cemetery is almost empty, Vincente de Santa will rise as the 'boss' of the graveyard. Eliminate him with a quick headshot.

Before this mission segment becomes available the player must complete:

"Filth and Other Entertainment"; and
"Biographies and Lies"

Ride to Escalera and go inside the mansion.

The Mother Superior tests her theory that Holy Water might end the plague. 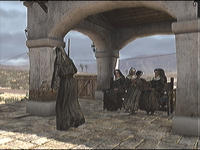 The following Trophies/Achievements can be acquired upon completing this mission:

Retrieved from "https://reddead.fandom.com/wiki/Mother_Superior_Blues?oldid=404740"
Community content is available under CC-BY-SA unless otherwise noted.