Mr. Kelley is a supporting character and a secondary antagonist featured in Red Dead Revolver.

After completing the mission "Battle Finale" with an Excellent rating, Mr. Kelley becomes available as a playable character in Showdown Mode.

With the addition of the Legends and Killers DLC pack, Mr. Kelley is a multiplayer character model in Red Dead Redemption.

Mr. Kelley is the three-time champion of the annual Battle Royale in Brimstone. He is one of Governor Griffon's top hired guns.

He is always well dressed and can often be found playing cards in the saloon.

Red first sees Mr. Kelley in the Saloon in Brimstone after completing the mission "The Cemetery". He tells Red that the Governor asked him to pass on his regards, but then advises Red to leave town as he thinks Red has no future in Brimstone.

Kelley's allegiance to Griffon is first revealed during the mission "Jailbreak" when one of the duelists that Red faces mentions that it was Mr. Kelley who told them to guard the Bear Mountain Mine. He is seen in a cutscene for the first time at the end of the mission "Hell Pass" when he shows up to deal with Buffalo Soldier at the governor's mansion.

Kelley is seen a few times, fighting other duelists during "Battle Royale". After dueling and killing Kid Cougar, Red can talk to Kelley.

Red is forced into fighting Mr. Kelley after Governor Griffon hijacks the competition. His men take the Sheriff inside and presumably beat him because he is injured afterward. After the Governor takes over he disqualifies Jack Swift and Annie Stoakes, leaving only Mr. Kelley and Red to decide the Royale.

After Red defeats Kelley in a duel, Governor Griffon orders Kelley to kill Red before fleeing the area. Mr. Kelley has soon recovered from the shots, and starts to shoot at Red. Despite the presence of civilians, Red manages to kill Kelley quickly.

Like many other characters in Red Dead Revolver, Mr. Kelley is a legendary figure in the Redemption universe. He is well known for being the three-time champion of the Brimstone Battle Royale, until his duel with Red Harlow.[1]

Mr. Kelley is very confident in his skills, to the point of often being arrogant: he considers himself above everyone, usually mocking other people with false compliments, like with Red, and believes working for the governor makes him untouchable. He seems to have a softer side with Natalie, training her into a gunslinger.

Kelley is a well-dressed fellow, sporting a black vest with white markings, dark pants, a white undershirt and a grey bow tie along with white gloves. He also wears a large black flop hat. Kelley has a well-kept black goatee and long, dark hair flowing down to his shoulders.

As a result of superior graphical power and a different art style, Mr. Kelley's Red Dead Redemption model is different in certain aspects. Namely Kelley's suit and hat are slightly different, wearing a less flamboyant black suit lacking as many markings, his hat having a wider brim and having shorter hair. His facial hair has also changed in appearance, as his goatee is more unkempt, with his mustache being thicker and separated from his beard, which instead lightly threads across the side of his face. Moreover, his bow tie, which is a much lighter shade, is now accompanied by a black ribbon.

Kelley is listed in Sheriff Bartlett's Journal under the Contestants in the Battle Royale section. The entry also mentions that Mr. Kelley is frequently accompanied by a young girl named Natalie, whom he is training to be a gunslinger like him. It is unclear if Natalie is related or merely a protégé. She can be seen in Brimstone saloon.

"Mr. Kelley made his way working as a mercenary for the highest bidder, and touring shooting competitions. He made quite a nice deal for himself, taking the Governor's gold and handling the most difficult problems. Winning the Battle Royale every year was something Kelley would probably do for the fun of it, but the Governor pays him anyway since it keeps the most dangerous fish out of his pond." 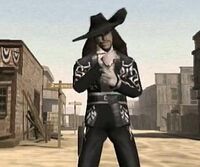 Mr. Kelley in the Battle Royale in Red Dead: Revolver.

Some Sins Are Never Forgiven

The winners and the loser

Mr. Kelley after the job is done

Mr. Kelley in Legends and Killers

Retrieved from "https://reddead.fandom.com/wiki/Mr._Kelley?oldid=413999"
Community content is available under CC-BY-SA unless otherwise noted.