The Murfree Brood are an antagonistic faction featured in Red Dead Redemption 2.

The Murfree Brood are known for being unbelievably cruel and territorial and can perhaps best be described as "horribly inbred yokels who murder, loot and pillage all over", owing to their physical deformities and brutal acts of violence. They rarely wear shirts and are considered by some to be more akin to a horde of animals or savages rather than an actual criminal gang. The gang does not appear to have a coherent ideology like the Lemoyne Raiders or the Del Lobo Gang, but rather seem intent on controlling the local area and keeping the populace in terror.

The Murfree Brood do appear to have a particular dislike of city-folk, as they are often seen robbing people who come from the larger cities in the East. In addition, the Brood appear to be opposed to the ever-growing industrialization of the local area. Unlike other outlaw gangs like the O'Driscoll Boys, the Murfrees don't carry any valuables and players mostly receive cigarettes, tonics, and herbs from looting them. Another difference is that the Murfrees don't camp in the wilderness. Instead, players usually encounter the Murfrees while they are looting a travelers' camp. Murfrees participating in scripted ambushes against the player will always carry money, however.

The Murfree family first immigrated to the United States in the 1700s, moved to Roanoke Ridge some time after, and lived a comfortable life. After the industrialization of the area, they were forced to seek seclusion in Beaver Hollow. It was here that they began their gradual descent into savagery, and by the year 1899 were known for brutally torturing, murdering and dismembering their victims as well as imprisoning women they captured before raping and torturing them, often for days on end before killing them. These horrible deeds made them feared all over the Roanoke Ridge area.

Dutch sends Arthur and Charles to clear out Beaver Hollow, to make it safe to host the gang's new camp location. The two sneak through the hollow, silently killing the enemy gang members until the alarm is finally sounded. Intense fighting follows, which results in Arthur and Charles taking the hollow by force. Afterward, Arthur and Charles find a young woman taken hostage by the gang. Arthur manages to gain her trust and takes her to her mother in Annesburg.

The Murfree Brood still survive after the fall of Beaver Hollow and often launch attacks against Arthur thereafter. This includes sending a flaming cart down upon him, before attacking him en-masse, attempting to bring him down with sheer numbers. However, it never fully regains the strength it once had.

A large portion of the Murfree Brood still exist by 1907, with seemingly little action made by the local law enforcement against them over the years. Their largest presence is seen at Beaver Hollow, which they have since retaken after the Van der Linde gang were forced to flee. They may attack John if he camps in the area, or appear elsewhere, but these encounters seem to occur slightly less frequently. 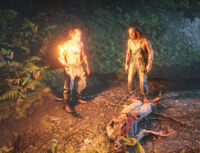