The Murfree Brood Prisoner's Note is one of the notes in Red Dead Redemption 2.

It can be looted from the body of a hanged man in Roanoke Ridge. The encounter also involves an ambush by three members of the Murfree Brood.

Lord forgive me for what I have done. I could not take another day of torture at the hands of those grubby men. They say that Hell awaits those who resort to self-murder. Can that be any worse than the goings on in that infernal cave? I will soon see. 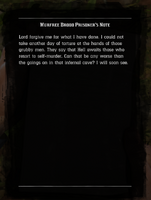 The note's description in the satchel menu

The hanged man seen from afar

Retrieved from "https://reddead.fandom.com/wiki/Murfree_Brood_Prisoner%27s_Note?oldid=415679"
Community content is available under CC-BY-SA unless otherwise noted.