N/A
My Last Boy is a mission in Red Dead Redemption 2.

Eagle Flies rides into Beaver Hollow to rally support for a final attack on Cornwall Kerosene & Tar. Against Rains Fall's wishes, Dutch and the gang accompany Eagle Flies into battle against the army.

Arthur meets Dutch outside of his tent, where there is a small gathering. He expresses his concern over why Cleet and Joe are with the gang and asks what’s going on. Micah tells him to show Dutch some respect but, before anything else can happen, Wapiti Indian warriors led by Eagle Flies ride into Beaver Hollow, armed and wearing war paint. Eagle Flies says the Army tried to kill his people for oil, and asks the gang to ride into battle against the Army with him. Rains Fall then arrives at camp and tries to intervene, saying that the men will be annihilated and telling Eagle Flies not to die for pride and that he is "my last boy". Eagle Flies ignores his pleas, telling his father that his words "mean nothing" to him, before he and his men depart from Beaver Hollow to battle the Army at the oil refinery. Desperate, Rains Fall turns to Arthur and begs for his help, just as Arthur had helped him before. Arthur agrees, followed by Charles, then Dutch and eventually the rest of the gang except for Micah, Cleet and Joe. As the gang ride out to the oil fields, they come across a wounded Indian warrior, who tells them that Eagle Flies is in trouble and that he needs help.

When the gang arrive, Arthur and Charles soon spot Eagle Flies on the walkway, fighting. Arthur, Charles and Sadie ride with a small group of Wapiti Indians to rescue him, while the rest of the gang go with Dutch to attack the Army from a different angle. During the battle, Arthur eventually finds Eagle Flies, who is in a tussle with a soldier. Arthur kills the soldier and saves Eagle Flies, who joins Arthur's group and continues fighting with him. Eventually, they regroup with Dutch and the others and, after dealing with the reinforcements who arrived by train and dealing with a machine gun, the gang and the Indians finally manage to wipe out most of the enemy soldiers.

With the battle seemingly won, Dutch and Arthur enter the warehouse to find the state bonds that the former had wanted, while Eagle Flies stays outside to take care of his wounded men. Dutch and Arthur enter the office in the warehouse and, after a brief search, Dutch manages to find the state bonds. With this, Dutch decides to leave before anymore soldiers arrive at the scene. On their way downstairs, they hear Colonel Favours telling his men to search for and kill the pair. Dutch and Arthur quickly eliminate a small group of them, before making their way to the exit. As they walk out, a pipe bursts, which stuns Arthur and leaves him incapacitated but, despite seeing Arthur being circled by a small group of soldiers, Dutch simply abandons Arthur and leaves him to die. However, before Arthur is killed, Eagle Flies bursts in and kills the soldiers in quick succession. He begins to help Arthur up but, as he is momentarily distracted, Colonel Favours appears and shoots Eagle Flies in the abdomen, mortally wounding him. Favours then turns towards Arthur and prepares to shoot him, too, only to be shot and killed by Arthur in the process. Afterwards, Arthur gets up and helps the fatally injured Eagle Flies out of the warehouse.

Once he and Eagle Flies are outside, Arthur confronts Dutch about intentionally leaving him to die in the warehouse, while Dutch defensively responds by telling Arthur not to be a "fool" and that he "did no such thing". Arthur then puts Eagle Flies on the back of his horse to take him back to Rains Fall at the Wapiti Indian Reservation, along with Charles and Paytah. During the journey, Arthur and Charles discuss how Dutch left the former to die, how far the gang has fallen, and how disappointed they are with the conflict between the Indians and the Army. Once they arrive at the reservation, Arthur and Charles bring Eagle Flies into Rains Fall's tent. Rains Fall has one last moment with his son, before Eagle Flies succumbs to his gunshot wound and dies, with Rains Fall weeping the loss of his last son. Outside, Charles tells the Wapiti Indians that they must move away, and opts to stay with them. Arthur offers to stay, too, But Charles says that he has other people to take care of, and the two say goodbye.

As Arthur rides back to camp, he has a severe coughing fit caused by his now-advanced Tuberculosis and collapses into unconsciousness. He is soon rescued by the German family who he had helped earlier that year and taken to Annesburg. Arthur wakes up from a bed and the mother in the family gives him something to drink and tells him that she wishes she could do more to help, but Arthur says that he must go and leaves. 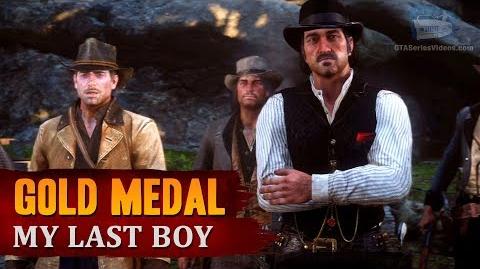 Retrieved from "https://reddead.fandom.com/wiki/My_Last_Boy?oldid=416750"
Community content is available under CC-BY-SA unless otherwise noted.