Mysterious Hill Home is a point of interest in Red Dead Redemption 2 and Red Dead Online. It is located in the Grizzlies East region of the Ambarino territory. 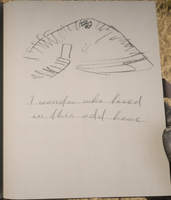 John's drawing: "I wonder who lived in this odd home."