Nastas is a supporting character featured in Red Dead Redemption.

With the addition of the Myths and Mavericks DLC pack, Nastas is also a multiplayer character model that may be selected in the "Revolution" section of the Outfitter.

Nastas is a Native American. He was born and raised on a reservation, where he received a classical English education at a boarding school. Being familiar with both sides of the ongoing Native American conflict, Nastas is openly critical of government policy, but also the criminal response of his fellow tribesmen for joining Dutch's Gang. He is initially an informant for the Bureau of Investigation, under Edgar Ross. It can be assumed that he agreed to infiltrate the gang in an attempt to "rescue" his tribesmen from their perceived inner destruction under Dutch van der Linde's leadership.

John is told that Nastas has arranged for Dutch van der Linde to be present on the Wreck of the Serendipity, for John to capture. The meeting turns out to be a trap, Nastas having been beaten and tied to a chair in Van der Linde's stead. John and Archer Fordham rescue him, escaping alongside Ross in an automobile.

Nastas is later seen reluctantly working alongside Harold MacDougal. MacDougal regularly showers Nastas with patronizing ignorance of natural sciences and native culture, while believing himself superior. During certain missions, Nastas expresses his fears for the loss of the forests, and the buffalo going extinct as well, regarding American "civilization" with resigned disdain. In his words: "There is no respect for the land anymore". Marston identifies with this after a long journey during which he experienced encroaching federalism and technology for himself.

Because of their conflicting worldviews, Nastas gets into constant arguments with MacDougal. MacDougal dismisses traditional cultural knowledge, with which Nastas is adept; accurately commenting on the over-hunting of Buffalo. Contrary, MacDougal argues back invoking his poor understanding of natural selection and ethnocentric attitudes. John appears to sympathize with Nastas, acknowledging his insight. Additionally, John appears to view Nastas with respect when he unconditionally accompanies him in an attempt to confront Van der Linde.

Nastas is then instantly killed after being shot in the head by Enepay, a member of Dutch's Gang, while being called a "traitor" during a confrontation between MacDougal and the Native American members of the gang. An enraged John immediately kills his murderers in revenge.

MacDougal later shows his respect for Nastas by posting a paragraph in the Blackwater Ledger noting his death, writing, "May you find God, dear friend".

Nastas appears in the mission "Curious Tales from Blackwater". 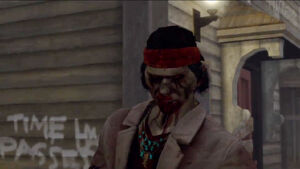 Nastas reappears as an undead, returning from the dead. Harold MacDougal claimed to have left his bag with Nastas, and while MacDougal is going to retrieve it, he is attacked by Nastas and also turns into an undead. Both of them then proceed to try to kill John. He appears to have died from a bite wound to his neck, rather than the headshot in the campaign. This hints towards Undead Nightmare taking place in an alternate timeline. 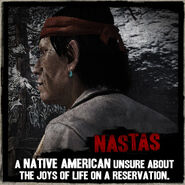 Nastas as he appears in multiplayer

Nastas is carried away by Marston

Nastas and MacDougal look down at Marston

Nastas being held at gunpoint

Strange looking face as the result of a visual glitch

A promotional artwork of an Undead Nastas for Undead Nightmare

MacDougal being attacked by Undead Nastas