Nathan Kirk was a banker from New York and is wanted for embezzling money from the bank he worked for.

John Marston helps Sadie Adler capture Nathan Kirk, who has has fled to Strawberry. John asks the townspeople if they have seen Nathan Kirk, although most either haven’t or are not forthcoming. Afterwards, John asks the hotel owner if he has seen Kirk, who recalls giving Kirk a room upstairs.

John knocks on the door and tells Kirk that he is here to arrest him, only to hear Kirk fleeing. He then kicks open the door and sees Kirk jumping out the window and mounting a horse. John quickly gets on his own horse, before being joined by Sadie, and the two give chase. Eventually, John manages to capture him, hogtie him, and then puts him on the back of Sadie's horse. With Kirk apprehended, Sadie rides away to deliver him to authorities. 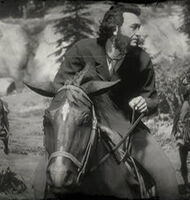