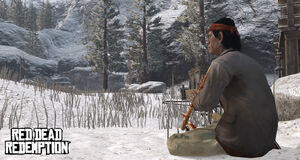 The main protagonist of Red Dead Revolver, Red Harlow, is half Native American by birth (his mother, Falling Star, being a member of the Red Wolf Tribe). His cousin, Shadow Wolf, also plays a large role in the story. Other Native Americans include Red's and Shadow Wolf's grandfather, Running Moon, who is the Chief of the Red Wolf tribe, and Grizzly, leader of the Black Elk Tribe, who is killed later by Shadow Wolf. A few Natives can also be seen in Bad Bessie's gang.

Native Americans can be found just about anywhere in West Elizabeth aside from Blackwater, and are participants in many of the random events. A large number of Native Americans left the reservations to join Dutch's revolutionary gang in West Elizabeth, with promises of a revolution and justice for past crimes against native peoples. Dutch's gang commit various crimes primarily in Blackwater, until Marston and the American Army attack Dutch's hideout, killing him and most of the Natives.

A Native American known as Nastas helps Marston in a few of Harold MacDougal's missions after John rescue him from the Wreck of the Serendipity with Archer Fordham and Edgar Ross, although he gets shot by Enepay in "For Purely Scientific Purposes" due to Nastas' role as an informant for the government.

Because Harold MacDougal perceives the Native Americans as a savage, ignorant group of people, they rallied behind Dutch and tried to hunt MacDougal down before he left the West, although John helps the Professor get safely on a train back to Yale in "The Prodigal Son Returns (To Yale)".

Native Americans can be played in Multiplayer as part of the Dutch's Gang category in the Outfitter.

Evidence of precolonial native life is somewhat scarce in Red Dead Redemption, with the exception of the Escalera Catacombs and altar at the end of Undead Nightmare. However, evidence of Native groups still living the old way can be found, the most obvious example is the ruined Native settlement in Mescalero, it is all that remains of the tribe that battled with Drew MacFarlane over their lands. Another example of a Native settlement is Torquemada, which is likely the ruins of an ancient Navajo settlement. Only a small portion of the settlement remains, and what is left is in poor condition, with many holes in the roof and a weak structure.

There are also other more subtle references to the wilder relations between Whites and Natives; a ruined caravan with arrows sticking from the wood can be found in the desert in Hamlin's Passing, another possible Native ruin is Rattlesnake Hollow, although it is possible it was a mining operation; it's also possible the holes are what is left from mining copper for the Navajo, or the sacred stone catlinite, however this is purely speculation. Overall, Red Dead Redemption is rife with unexplained ruins and clues to the violent past of the American frontier.

Native Americans play a much larger role in Redemption 2, as the Van der Linde gangs interactions with the Wapiti Indians are a large part of the final chapter of the gang's story.