Native Burial is a point of interest featured in Red Dead Redemption 2, in the Big Valley region of the West Elizabeth territory.

Despite being in the middle of a forest, the burial ground itself can be found in the center of a clearing, surrounded by trees and scrubs.

This location consists of small rocks, made into a cross shape, lying on the ground; these rocks are then surrounded by a circle of larger rocks. In the middle of the cross lies the Stone Hatchet.

This circle of rocks is encircled by human and animal skulls stuck on the top of spikes which are dug firmly into the ground. These spikes are decorated with Native American trinkets, such as feathers and colored rope. Some of the spikes also have antlers attached to them.

Littered around the site are pieces of wooden scaffolding, with most of them covered in drapes of animal hides, although not all of them are. 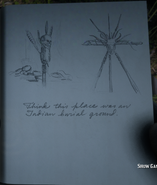 Arthur's drawing: "Think this place was an Indian burial ground." 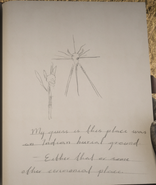 John's drawing: "My guess is this place was an Indian burial ground. Either that or some ceremonial place."