Nekoti Rock as the axis of Dutch's Gang is notable in the unfolding of the story and provides perhaps one of the more challenging Bounty Hunting locations for Marston in single-player.

The Jack Marston mission "Spare the Love, Spoil the Child" takes place in this location.

There is also a small cave located at the top of Nekoti Rock, which contains a treasure chest for the last Treasure Hunter Challenge. Nekoti Rock is a good place to complete the Lemming Award Stat challenges in multiplayer. There are a large amount of bears in this area, so caution is advised.

In the Undead Nightmare DLC, sasquatches can sometimes be found here.

The landscape around Nekoti Rock consists of thick coniferous forest, snowy outcrops, and shallow, rugged plateaus. The peak of the mountain can be reached from the forests below via a twisting path. From the peak, it is possible to see huge distances and certain locations of the game world including the Great Plains, Blackwater, the territory of New Austin and even parts of Nuevo Paraíso far to the south.

Nekoti Rock features a large array of animals unique to the mountain landscape, some of which are large predatory mammals. Due to the presence of these creatures, Nekoti Rock serves as a useful locale for hunting the following:

In single-player, the mountain is also the location of Brumas the Bear for the final Master Hunter Challenge.

Marston getting attacked on Nekoti Rock 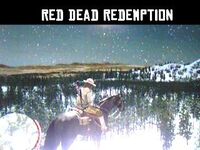 View from Nekoti Rock on Horseback 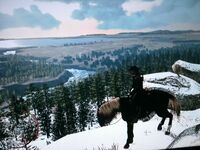 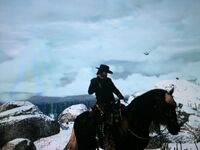 A bear chasing the player near Nekoti Rock