New Hanover is one of the five American states in Red Dead Redemption 2 and Red Dead Online and the second largest territory in the game.

New Hanover is characterized by dense forests and open plains, comprised of three regions: northeast is where the densely forested Cumberland Forest is located; right in the center are the prairie plains of The Heartlands; to the east is the hilly and foggy Roanoke Ridge.

Much like the state of New Austin, the territory is in the process of modernization and it is not fully settled yet, with only two towns (Valentine and Annesburg) and the small, run-down settlement of Van Horn. Despite that, there are numerous ranches and homesteads dotted around the state due to its lush and fertile grassland, most notably Emerald Ranch. The state's name is of German origin, as is Annesburg; this might imply that it is inhabited by some German settlers.

It is the second largest territory in Red Dead Redemption 2 and, as such, there is a notable amount of wildlife and outlaws roaming its rural regions. In the heart of the state, the oil company Cornwall Kerosene & Tar, run by Leviticus Cornwall, manages a large factory which is heavily guarded and almost impossible to infiltrate without being attacked.

New Hanover is bordered by Flat Iron Lake to the southwest and the Dakota River separating Ambarino and New Hanover to the northeast, Lemoyne to the south and Grizzlies East to the east, bordering Cumberland Forest and Roanoke Ridge.

Cumberland Forest lies less elevated compared to Grizzlies East, and serves as a transition between the mountainous woodlands from the plains. The region is one of the smallest in the game.

Roanoke Ridge lies near the Lannahechee River and is an area of deciduous woodland, often covered in mist. It features a thriving mining industry, as evident in both Annesburg and some of the villages.

The Heartlands is characterized by rolling hills and plains. It is not so highly elevated compared to other regions, aside from the buttes in the heart of the area and the riverbanks near the Dakota River.

New Hanover, for the most part, is a generalized Great Plains state. It combines elements of various states including Oklahoma, Arkansas, Nebraska, Kansas, Colorado, Wyoming, and South Dakota.

New Hanover opens in Chapter Two after the Van der Linde gang relocates to Horseshoe Overlook in the mission "Eastward Bound", in which they flee the state of Ambarino after successfully completing a train heist. The gang sets up camp in The Heartlands region of New Hanover, near the livestock town of Valentine.

New Hanover is where much of Chapter Two takes place. Arthur and the gang perform various heists and jobs around the Heartlands before being forced to relocate into the state of Lemoyne.

New Hanover is revisited in Chapter Six, when the gang sets up camp in Beaver Hollow, Roanoke Ridge, after eliminating the Murfree Brood from the caves. Annesburg and the surrounding area are a focal point for the story during most of the chapter.

After the downfall of the Van der Linde gang, John Marston reunites with Sadie Adler, one of the gang’s members, in Valentine, where the two partake in a bounty. Eventually, the two leave the state to pursue the bounty at Painted Sky in West Elizabeth. After catching their bounty target, Ramón Cortez, they cross the Dakota River back into the territory and they pass through the state during the travel skip. The territory is not visited or seen again in the main story missions.

The flag of the state of New Hanover 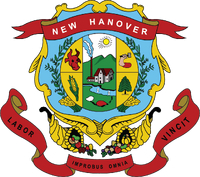 A map showing the shape and the borders of New Hanover