Nicholas Timmins is the recently elected Mayor of Strawberry. At some point before coming to West Elizabeth, he is mentioned to have abandoned his educational studies and family for a life in a less developed country.

After becoming mayor, he made it his mission to revolutionize the mountain town to become an attraction for wealthy tourists. He constantly instructs his citizens to be kind and tolerant, to the point of even threatening to drive out any citizens who don’t follow his instructions.

He can commonly be found near the Welcome Center, addressing citizens and visitors alike about the beauty of the town and expressing firm support for the Temperance movement.

While sitting at the front porch of the Welcome Center, he can be approached by the player in which he will greet and tell them to enjoy their stay while also urging to be kind to the populace. Among his compliments regarding his changes to the town, he will also describe it as "Tolstoyan". Though he admits he does not know what the term means, he says he finds it interesting and further applies it to the town having a liking for interesting people.

Upon a later visit, the mayor can be found near the general store, where he will once again be seen attempting to address townsfolk. He will recognize the player from before and claim that it is nice to see them again. During this, he will reveal vague details about his past, such as having worked in some capacity at Princeton University and a reputation-damaging rumor that spread around about him. He subsequently shrugs it off as being false and continues boasting about his leadership of the town supposedly being more beneficial than living on the East coast.

Nicholas Timmins is a sharply-dressed individual who wears a blue frock coat over a white dress shirt with puffed sleeves and a brown, buttoned waistcoat decorated with a gold chain. He also wears dark grey trousers and smart black shoes, along with a top hat and a prominent black bow tie.

Nicholas Timmins addressing the townsfolk at the Welcome Center 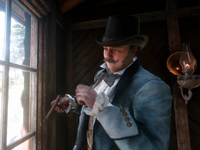 The Mayor with a cigar

Nicholas Timmins walking around Strawberry after his second encounter is complete

Nicholas Timmins having a smoke near the Doctor's Office in Strawberry

Nicholas Timmins seen without his hat

Nicholas Timmins running away after being attacked

Retrieved from "https://reddead.fandom.com/wiki/Nicholas_Timmins?oldid=395645"
Community content is available under CC-BY-SA unless otherwise noted.