With the addition of the Liars and Cheats DLC pack, Nigel West Dickens is also a multiplayer character model that may be selected in the 'Redemption' section of the Outfitter.

Born in Fort Wayne, Indiana, West Dickens is an old swindler who poses as a traveling salesman when he is really a con artist and is purported to have unique miracle cures for many medical and psychological problems, which he calls Nigel West Dickens' Elixir. He is an impeccable dresser and travels in an opulent emblazoned stagecoach. At some stage, Dickens also had a son, who died soon after birth.

In 1907, the New Hanover Gazette described Dickens as a studied man of letters, botany, ornithology, and the history of home medicine practiced throughout the ages who has vowed to uncover "Hippocratic frauds" who were preying on victims across the country. Dickens had begun demonstrations showing that sufferers, of rheumatism, neuralgia, rickets, dysentery, and scarlet fever could be cured of their maladies by use of a simple medicinal tonic. The response was enthusiastic and in more than one town the local doctor taken to task for peddling fraud cures. At the time, Dickens planned to take his message on the road and root out charlatans and purveyors of false science. It is unknown if Dickens was one of these charlatans all along, or if he eventually became one himself after exposing enough of them to learn the tricks of the trade.

John Marston, after having worked with Marshal Leigh Johnson to clear Pike's Basin, is tipped off by deputy Eli that West Dickens has gone missing. He states that West Dickens is missed by his repeat customers in Armadillo. Marshal Johnson equates West Dickens with a drug dealer.

Marston finds West Dickens having been shot and exposed to the elements not far from his stagecoach south of Coot's Chapel, and returns him to the doctor in Armadillo while fighting off bandits who want to finish the job.

Despite Marston's personal dislike of him, West Dickens becomes the central networker and orchestrator of Marston's plan to assault Fort Mercer. West Dickens puts Marston in contact with Seth Briars and Irish, as well as supplying his newly armored stagecoach and uses the "Trojan horse" strategy to deceive the outlaws.

The attack does well, but they find out that Bill Williamson had escaped yesterday morning. Irish then volunteers to take John into Mexico on a barge. West Dickens suggests that he intends to travel abroad, having exhausted customers in the New Austin region. When Marston meets Irish at his barge on the way to Mexico, West Dickens is seen talking with Irish. This is when he tells them he is off to Europe or China.

He is later seen in the Blackwater police building, being arrested for possession and distribution of narcotics. John recognizes him and tells the officers to release him, stating he helped him catch Bill Williamson, with Edgar Ross sarcastically claiming that he is a hero. He is then let go.

One of the first newspapers that can be bought in 1911 has an article about Dickens' "miracle tonic," stating it possesses extraordinary healing powers, saying a woman with one leg grew back her lost limb, and a man on his deathbed got up and went to the nearest brothel with the vigor of a 14-year-old boy. It can be assumed that Dickens has greatly exaggerated, if not outright fabricated, these feats. On the other hand, the accounts could be true to provide a "well what do you know" moment. If one would pay attention, they can see that the game never shows what happens to an NPC after drinking the elixir. Also, after Marston drinks it, he gains the second level of Dead Eye, suggesting that the elixir may have something to it.

Dickens is first seen at Fort Mercer trying to sell his Elixir for 100 gold coins, claiming it cures the zombie plague and repels zombies. He sees John and tries him to play along with his act but John ends up saying 100 coins is too much for a drink and threatens him with his revolver to give people a free sample of the Elixir. Dickens has no choice but to reluctantly give the customers free samples. However, he and John watch a man drink the elixir, exit the fort, and be immediately mauled by undead. Nigel gives John a bottle of elixir and tasks John with finding more plant ingredients so that he can attempt to make an actual cure for the plague.

Upon the second encounter, Dickens sends John on an errand to Riley's Charge to acquire some metal parts he eventually uses to construct and complete a Blunderbuss. John, despite Dickens' hasty words, is unimpressed with the weapon.

Dickens also confides in John concerning a branch of soldiers "officially" crossing the border to help those in Mexico. Dickens' age would disallow him to pose as a member of the group and informs John of a group of army deserters stationed at The Scratching Post that may be willing to lend him a uniform instead. When John asks Dickens where he's heading, Dickens optimistically replies that he's headed for either Baghdad or to meet his maker at the hands of one of the undead, smiling as he and John depart amicably. Dickens leaves the scene on foot and he is not seen again.

Nigel is a friendly, positive, and jolly individual. He is also shown to be somewhat of a fraud, showing that he sells non-working medicine to get other people's money. Although all that, he does try to be helpful and uplifting to others. 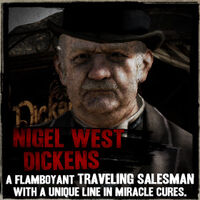 Dickens as a Redemption Multiplayer skin

West-Dickens being arrested in Blackwater

Nigel scanning the horizon for undead