No Good Deed is a Stranger mission featured in Red Dead Redemption 2. The quest becomes available during Chapter 3.

Dr. Alphonse Renaud is found sitting near the front of the Gray Woolen Mill in Rhodes. After the player greets him, he quickly apologizes for offending him and attempts to flee before the player tells him to clarify why he's acting strangely. The doctor states that his wagon and medical supplies were stolen by a gang.

A nearby stranger will tell Arthur that he overheard the thugs say they were taking the wagon to Macomb's End.

Fight about six thugs. Find the wagon by the dock.

Drive the wagon back to Rhodes. Two mounted thugs will attack along the way. 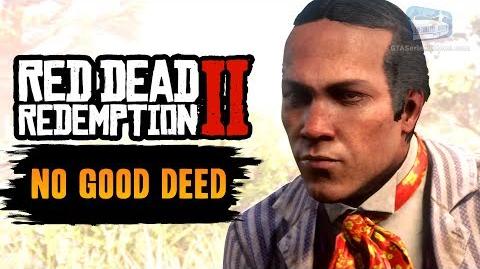 Retrieved from "https://reddead.fandom.com/wiki/No_Good_Deed?oldid=412807"
Community content is available under CC-BY-SA unless otherwise noted.