Nuevo Paraíso (Spanish for New Paradise) is a Mexican territory featured in Red Dead Redemption and comprises the entire presence of Mexico within the game.

Nuevo Paraíso appears in Red Dead Redemption 2, but it is only accessible through exploits.

Nuevo Paraíso is a northern territory of Mexico, separated from the United States by the San Luis River along the border. The province is composed of three constituent regions: Punta Orgullo, Perdido, and Diez Coronas.

During the years 1899 to 1907 when Red Dead Redemption 2 takes place, it is implied that the country is undergoing internal strife.[1] Additionally, because of a diplomatic dispute between the United States and Mexico, the border crossing to Nuevo Paraíso is closed, and it is stated that the Mexican Army is patrolling the area closely, though no soldiers can actually be seen. By the time of the events of Red Dead Redemption, Mexico was in the early stages of an armed revolution, led by Abraham Reyes.

Nuevo Paraíso, like its American counterpart New Austin, is undergoing settlement, and still has a heavy presence of outlaws and wild animals, though relatively speaking is more inhabited. The most prominent settlement in the territory would be Chuparosa, which acts as a hub of commerce and trade, and is directly serviced by railway. Meanwhile, Nosalida is another economically important settlement, serviced by stagecoach.

One noticeable feature about Nuevo Paraíso is that it is somewhat more impoverished compared to its American counterparts, and there is a more visible disparity between the rich and the poor. This broadly reflects the conditions in Mexico prior to the Mexican Revolution, which was partly sparked by land reform.

The major industries in Nuevo Paraíso are agriculture, mining, ranching, and transportation. The area's economic expansion has attracted immigrants from China, Germany, Italy, and Spain. Despite some prosperity, the territory is fertile ground for the Mexican Revolution, which is popular with the lower classes.

The San Luis River separates Nuevo Paraíso (Mexico) from the United States and it is bordered to west by the Sea of Coronado and by unnamed mountain ranges to the east and south. The territory can be traversed by rail, raft or land through bridges. Nuevo Paraíso has access to both Flat Iron Lake and the Lannahechee River, making it an important Mexican trade point.

The country has a large semi-arid desert with low-lying plants and cacti growing around the area. More of its geography is characterized by canyons, mesas and ridges that form the entirety of the desert. Dust storms may occur within the territory.

The name Nuevo Paraíso may be taken from the real-life Mexican border state of Nuevo León. However, the state is based on the northwest Mexican states.

The territory is inaccessible due to the growing tensions between Mexico and the United States. Compounding the conflict is the looming revolutionary threat occurring within the region. Its entirety can be seen in New Austin, however.

The in-game map keeps the same geography, yet, with the exception of El Presidio, the whole area of Nuevo Paraíso is empty without any other buildings. However, the geography is nearly complete, the only exception being Roca de Madera, which is absent and cannot be seen from New Austin. The river jetty near El Presidio is still present.

Additionally, Nuevo Paraíso has distinct weather patterns, updated vegetation and textures, particles, ambient noises, and the areas along the San Luis River can be fished.

It is the second region that John Marston travels to during the main storyline, and it is unlocked by the mission "We Shall Be Together in Paradise".

The following is an alphabetical list of the 30 locations found in Nuevo Paraíso:

Typical landscape in the vicinity of Punta Orgullo

Typical landscape in the vicinity of Perdido

John talking with an stranger at Nuevo Paraíso

Feeding the wildlife in Nuevo Paraíso

Typical landscape in the vicinity of Diez Coronas 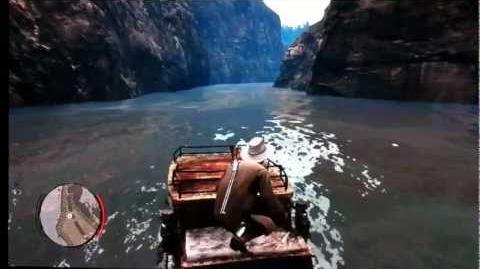 The Stagecoach Floats! How to go boating in Red Dead Redemption (the easy way) 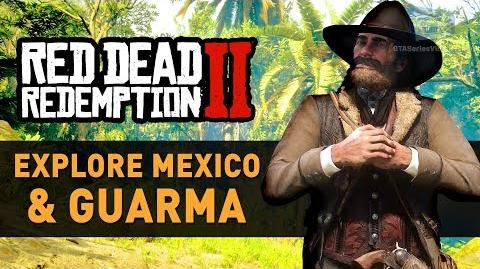 How to Reach Mexico & Guarma in Red Dead Redemption 2 (after Patch 1.03 without cheats)