Oh, Brother is a Stranger mission in Red Dead Redemption 2. It is a three part quest that becomes available during Chapter 4.

Proetus and Acrisius are two twins, who are competing over a woman named Helen. They are trying to prove their love and show manliness to Helen.

Proetus and his brother Acrisius are seen arguing outside of a store in Valentine. Proetus asks Arthur if he would help them prove their braveness. He suggests Arthur shoots bottles off the top of their heads, and Arthur has no choice but to accept.

They head to the back of the saloon and place a bottle atop their head, and Arthur successfully shoots the bottles. Then they suggest they use smaller bottles, and proceed to put smaller ones on their heads. Arthur manages to shoot them off also.

After that, they then come up with the idea to perform the previous action but while standing on one leg. They then stand on one leg, and Arthur successfully destroys the bottles. They will then leave with Helen.

In the second part they are found again competing for Helen's affections, and will insist that the player punch or kick both of them to prove their manliness.

In the mission's third and final chapter, they each climb into a barrel and ask Arthur to push them down a river and over a waterfall. After both miraculously surviving the fall, the brothers agree to stop antagonizing each other for the sake of a woman and depart to explore the West. 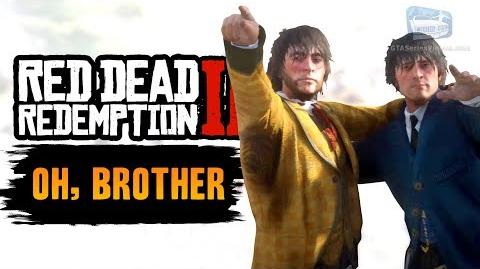 Retrieved from "https://reddead.fandom.com/wiki/Oh,_Brother?oldid=412808"
Community content is available under CC-BY-SA unless otherwise noted.