The Oil Derrick is a point of interest in Red Dead Redemption 2 in The Heartlands region of the New Hanover territory.

The Oil Derrick is a recently abandoned structure situated in The Heartlands, New Hanover. It belonged to a minor local company that was owned by Mr. Varley who happened to undercut Cornwall Kerosene & Tar, a rivaling company in the region. This action cost Varley his life, however, and his burnt remains can be found on the derrick. 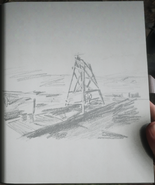 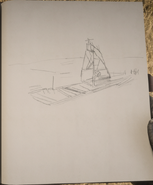 John's drawing.
Add a photo to this gallery

Retrieved from "https://reddead.fandom.com/wiki/Oil_Derrick?oldid=379862"
Community content is available under CC-BY-SA unless otherwise noted.