Carbine Repeater
Lasso
Dead Eye Targeting ability
“Colm can wait. Best to get some of them outta there. And much less fun to rob him and his score if he never finds out about it.”

Old Friends is a mission in Red Dead Redemption 2.

Looking for information on the O'Driscolls' planned train job, Dutch leads the gang into an attack on their camp.

Micah Bell and Bill Williamson have a small fight, before being stopped by Dutch van der Linde. Dutch, Arthur, Lenny, Javier, Bill, and Micah ride to the O'Driscoll Boys' camp to steal their plans to rob a train.

During the ride back to camp after slaying the O'Driscolls, they come across another O'Driscoll who they previously saw Colm reprimand. He takes flight, but Arthur chases him, hogties him, and brings him back to Colter to be imprisoned.

Catch and hogtie Kieran within 45 seconds.

- A quick way to do this is by simply killing his horse the moment you see him, then throw your lasso at him and hogtie him. This will drastically save you time (keep in mind, you will lose minor honor for killing the horse). Complete within 15 minutes and 30 seconds.

-Quickly kill all enemies at the camp. Don't waste your time looting all the bodies. Just loot one or two then rush to defend the second wave of O'Driscolls. After that you can loot the rest of the bodies.

Kill 3 O’Driscolls in the same Dead Eye use.

-Make sure three enemies are in the open when defending the second wave, then activate dead eye and aim at three O’Driscolls at vital points (their heads).

The hideout seen from distance

Dutch waiting for Arthur to make the call

The shootout at Ewing Basin

Micah finds the map for the train robbery 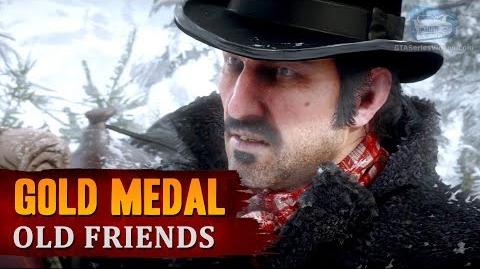