Old Habits is a mission in Red Dead Redemption 2.

A gang of hired-guns cause trouble on Pronghorn Ranch.

John wakes up one morning on the ranch to hear a commotion outside. He heads out to see two Laramie Gang members and the leader of the gang terrorizing and harassing Abe.

John threatens the gang leader, which leads to a fistfight. John nearly wins the brawl, but is stopped before doing so by Abigail. The leader then begins to harass Abigail, and proceeds to threaten John and swears that he and his gang will return. The three gang members then finally leave the ranch.

Afterwards, Abigail expresses visible and verbal agitation at John, since he promised her no more violence.

The mission's image in the menu depicts John with his 1899 hairstyle, instead of the short hair he has in 1907. 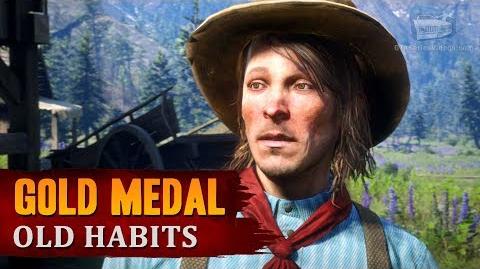 Retrieved from "https://reddead.fandom.com/wiki/Old_Habits?oldid=385048"
Community content is available under CC-BY-SA unless otherwise noted.