The Old Tomb is a point of interest featured in Red Dead Redemption 2.

The Old Tomb is an ancient burial site situated in Roanoke Ridge, New Hanover. The altar and various objects found around the site, along with the general design, indicates that it was built by Vikings at some point.

The Viking Hatchet, found on the southern edge of the altar, and the Viking Helmet together with the Ancient Viking Comb, found resting on a ledge in the northwestern cave, confirm this assertion.

Arthur's drawing: "Who were these fellas?" 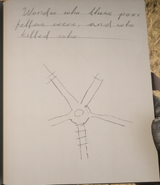 John's drawing: "Wonder who these poor fellas were, and who killed who."

One of the entrance points of the tomb.