“Now, Irish, that Gatling Gun doesn't work. I find that rather upsetting, don't you?”

On Shaky's Ground is the twenty-first mission in Red Dead Redemption.

After John stops Irish from robbing two nuns, he finally reveals to John that his contact Shaky knows where they can get ammunition for the Gatling Gun. When they arrive at Shaky's warehouse, through the door they hear the sounds of Shaky being roughed-up by some goons. Marston must rescue Shaky and fight his way to the ammunition stores.

Marston needs ammo for the Gatling Gun to be used in the assault on Fort Mercer, so he arrives at Thieves' Landing to meet Irish. In the opening cutscene, Irish is once again drunk and is attempting to rob two nuns when John finds him. John straightens him out, apologizes to the nuns, and sends them on their way.

The player then follows Irish across town to the door of a warehouse where they are to meet Irish's contact, Shaky. In a cutscene, Irish finds that the door that was supposed to be unlocked is locked and tells John to follow him around to the back of the warehouse to find another way in.

The player follows Irish around the back of the warehouse and up a flight of stairs to a second floor entrance. In a cutscene, Irish listens at the door and hears Shaky being interrogated and beaten, presumably because his plans to unload the gatling gun ammo had been discovered.

The player then must climb a couple of ladders to reach the roof of the warehouse. Once on the roof, the player must get to the other side of the roof without being heard, by crouching or walking slowly. This leads to an open window which provides a point of access for rescuing Shaky. Another way is just to climb up on the first ladder then go to the left and you will see a door that is unlocked.  You can then just walk into the warehouse without getting on the roof. Either way, a few of Shaky's captors must be killed, after which Shaky is untied.

The player and Shaky fight their way out of the warehouse, where a number of reinforcements have taken positions. Once outside additional reinforcements in the yard must be defeated before the gatling gun ammo can be reached.

The gatling gun ammo is loaded onto the cart which Irish has brought up to the warehouse. Following a cutscene, the player rides shotgun on the cart as Irish drives to MacFarlane's Ranch. A few waves of enemies attack the cart along the way - mostly on horseback, but with one overhead on a bridge as well.

The mission ends with the arrival of the cart at MacFarlane's Ranch. As they reach the ranch, John makes it clear to Irish that he expects him to participate in the fighting at Fort Mercer.

When you reach MacFarlane's Ranch at the end in Irish's stagecoach, get off the stagecoach just as it is about to stop. Then it will tell you to get back in. Do so and if you have the timing right, it will cut to a scene of them talking before you are fully on. When the conversation is over you will have finished the mission and will still be in the stagecoach. Irish will then drive off with you still in. He takes you on a bumpy ride that usually results in him crashing it.

"And I've come to tell you, if you ever pretend to forget my name or your debt to me again, I'll make sure you reach heaven before these two ladies."

"Now get down there!"

"What the hell's wrong with you, robbing these gentlewomen and ladies of the Lord?"

"I thought they was doxies!"

"Ladies, I'm sorry about this man. He's unfortunately lost his mind to the demon drink. At least I hope he has and he wasn't this stupid all along. So ah... Please excuse us."

"Now, Irish, that Gatling Gun doesn't work. I find that rather upsetting, don't you?

"Heartbreaking. Which is why I was just comin' ta see ya, when th' drink got th' better o' me."

"Come on. I know where we can find the parts for ya. Mother feckin' Mary!"

"Shaky's made the arrangements and he'll..."

"Oh, shite! Sounds like Shaky's only gone and got himself found out."

"Alright, now all we have to do is find out who you work with."

"Ya hear me, Shaky, you wretched fucking son of a whore?"

"Labor relations don't sound like they're exactly... at an all-time high. You sneak in there and get poor Shaky loose. I'll go get us a wagon... Good luck, Marston. He's a good man, that Shaky."

"My kindness is only as good as the bullets you can fetch up for me and your friend Irish. Let me down and you'll be a dead man."

"Half-even, Shaky. You still owe me for them morphine pills to calm your nerves, Sh-sh-sh-Shak-k-k-ky!"

Marston and Irish fighting their way back to MacFarlane's Ranch.

"Helluva team, me and you! We should consider makin' this a more permanent partnership."

"I think I've about had my fill of liars in this life, 'partner'." 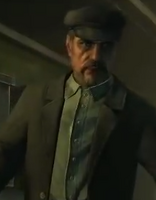 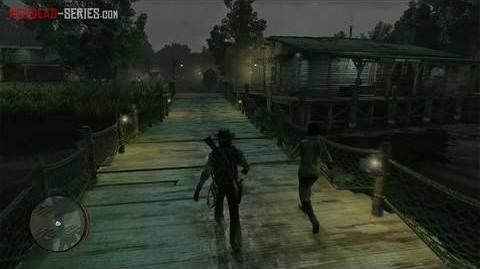 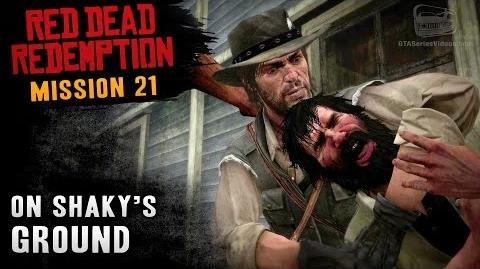