The Ornate Dagger is a melee weapon featured in Red Dead Redemption 2.

The Ornate Dagger is a short melee weapon, featuring a decorated, silver blade. It deals a moderate amount of damage and is very short-ranged.

It cannot be customized.

The weapon can be acquired from a strange pale man dressed in black, in the back alleyways of Saint Denis, following the completion of the 5 Mysterious Writings. 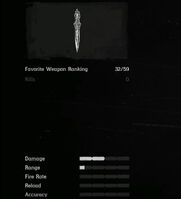