Swanson worked as a clergyman in the past, but as he indulged in earthly pleasures such as alcohol and sex, he slowly lost his job and his family, as well as his faith. At some point, he affiliated himself with a woman named Margaret, but she was already married to another and thus Swanson was subject to the sin of bigamy which he said was "Just another of sins to add to the list". The law caught up with them while they were in San Francisco and she fled, jumping a ship bound for Shanghai, he never saw her again. Some time later, under unknown circumstances, Swanson saved the life of Dutch van der Linde at some point; with Dutch in his debt, Swanson was allowed to stay with and join the Van der Linde gang.[1]

Arthur has to go find Swanson, who was last seen near a railroad station. After going to the station, he finds Swanson very drunk and playing poker with two men. Swanson then tells him that Arthur has freed him, and runs away, forcing Arthur to go in pursuit of him. Arthur finds him being beaten up by a buff man, who Arthur can either kill or knock unconscious. While Arthur was busy fighting the man, Reverend once again escaped and got himself stuck on the top of the railroad tracks. Arthur will go and pull him out right before the train goes by, and bring him back to camp.

During a discussion with Hosea at the campfire, Swanson reveals his marriage and having unknowingly committed bigamy through it. He states, "I suppose I still am married in a way but it hasn't been terribly fulfilling".[2]

After Arthur returns from Guarma and arrives at the gang's temporary camp in Lakay, Swanson is shown to have recovered from his addictions and is sober, functioning well.

After the gang moves to Beaver Hollow, Swanson is shown to remain abstinent from his previous vices and sensible, despite the circumstances. He speaks somewhat positively on his improved condition, which is disregarded by other members such as Leopold Strauss.[3] He eventually chooses to leave the gang due to its inevitable collapse.

If Arthur has low Honor or did not complete "Of Men and Angels": Arthur meets Swanson one last time at Emerald Station after the mission "The Fine Art of Conversation". The former clergyman says that he has decided to leave and that he tried to persuade some of the women to go too, but they declined. Varying on Arthur's Honor level, Swanson gives his assessment of Arthur's character and what he can do with the remainder of his life, before boarding the train and never being seen again.

After being rescued by John and Uncle in Saint Denis, Charles informs John that Swanson had moved to New York to become a preacher. A newspaper article reveals that Swanson became the minister of the First Congregational Church of New York.[4]

Swanson is a broken and disheveled priest, often drunk. He is also a drug addict, as Arthur can find the Reverend’s supposed bible hiding a syringe, a tourniquet, and a bottle of morphine.

Later in the story, he eventually sobers up and becomes more responsible. This is best seen in how, when the gang began to implode, he was one of the first to sense its impending doom and leave, claiming to be a "changed man". Swanson also possessed a certain degree of astuteness and was able to see through Dutch's true nature, claiming that he won't die for "nonsense spouted by a fool".

Swanson has red hair with grey patches, indicating his aging. He has a large, curly mustache, and wears standard black priest attire. During chapters 3-6, he can often be seen without his hat and robe. 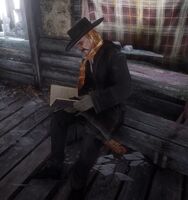 The inside of Swanson's bible