Town of Blackwater in Great Plains, Commonwealth of West Elizabeth

Oswald Dunbar is the long-standing police chief of the Blackwater Police Department. He has an affirmation in keeping the citizens of the city safe as well as maintaining law and order. He is shown to be respectful, kind, and thought of highly by the town’s residents.

As of 1907, there are rumors that Dunbar will retire at the end of the year; he most likely did so, given his old age and absence in Red Dead Redemption.

Dunbar is first seen sitting at his desk when a deputy is shown bringing in the protagonist. He expresses disagreement in how the marshals who apprehended them did so but relents to have them tried for the crime.

He is later encountered berating a deputy for allowing a notorious conman escape from his cell, angrily expressing worry about getting removed from the department due to the deputy's negligence. He eventually notices the player and their posse, subsequently asking them to help him capture the escaped fugitive.

If the player becomes a bounty hunter, they can capture various wanted individuals that appear on the bounty board outside Dunbar's office, and bring them in dead or alive. Dunbar will pay for the price on them and make a comment depending on whether the criminal is alive or dead.

Dunbar appears at the end of the mission "An Honest Day's Labors" where John Marston and Sadie Adler bring him Shane Finley to collect the bounty placed on him.

The player can also capture the bounties of Elias Green, Otis Skinner, and Herman Zizendorf for Dunbar, which will earn them a cash reward.

Dunbar always wears a dark blue Blackwater Police Department uniform with gold trim and a BPD badge. In 1898 he has long hair with a mustache and wears a version of the Military mountie hat recolored to match his uniform. In 1907 he is clean-shaven with considerably shorter hair, and he now wears white formal gloves and a dark blue peaked hat with gold trim.

Oswald Dunbar in 1898 during a bounty hunting mission cutscene 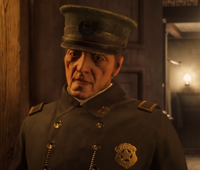