Skinner is believed to have been born circa 1859. He is one of the leaders of the Skinner Brothers - an outlaw gang of distinct and notorious sadism.

Skinner and his gang have set up camp in the Tall Trees region of West Elizabeth by 1907, and his actions have made him wanted by Blackwater Police Department. John Marston manages to track him down, and Otis Skinner is either killed or captured. If he is killed, the police chief Oswald Dunbar will ask John to dump his body in a cart behind the police station or, if he is brought in alive, he will eventually be hanged publicly. Regardless of what happens, Otis Skinner is subsequently buried in the Blackwater cemetery. 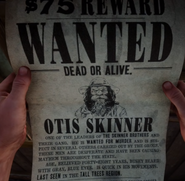 Otis being hanged in Blackwater