Our Best Selves is a mission in Red Dead Redemption 2.

This is the penultimate mission of the game's sixth chapter, and the final mission that the player can free roam as protagonist Arthur Morgan beforehand.

As their final job, the gang ride to Saint Denis to intercept and rob a train carrying army supplies and payroll, headed for the recently destroyed Bacchus Bridge.

Arthur is greeted by Dutch, who says that Uncle, Pearson and Mary-Beth have left, calling them cowards. Dutch then tells Arthur that the gang are about to rob a train, and that it will be the gang’s last job, prompting doubt from Arthur. Arthur agrees to take part in the robbery, but has one request - for John and his family to leave the gang. Dutch is initially hurt, but quickly calms down and seemingly agrees. The gang then ride to Saint Denis to catch the train that they’re going to rob.

On the way, John goes to get the dynamite that he had hidden, and Arthur decides to go with him. They talk about the current situation, and the plan to get John out of the gang. After Arthur retrieves the dynamite, the pair ride back to the others who are waiting on the outskirts of the city.

The gang plan to board the train silently when it‘s stopped, but the train does not stop and instead thunders past them. In response, the gang chase after the train, and eventually board it, while they begin fighting the US Army soldiers on board. At some point, a train carriage catches fire thanks to a soldier firing at a lantern while dying. Arthur jumps onto the back of Dutch’s horse (and John onto the back of Bill’s) so that they can overtake the burning carriage and continue with the robbery.

On the new carriage, Arthur sets up a Maxim Gun while John works on uncoupling the burning train carriage. Unfortunately for him, he is shot in the shoulder while doing so and falls off the train. Dutch promises that he’ll go back and get John (along with Javier, Micah, and Joe), while the rest of the gang keep fighting off the soldiers on their tail. Eventually, the gang are free of them, and Arthur plants the dynamite on the armored carriage’s door, and ignites it, to blow it open. He accesses the loot, and is surprised at how much there is, until the gang has to leave the train due to it approaching the destroyed Bacchus bridge.

After getting out, Dutch and Micah tell Arthur that John “didn’t make it”, and that he had perished. Disappointed, Arthur rides with the others back to camp with the money, at which point the the next mission begins. 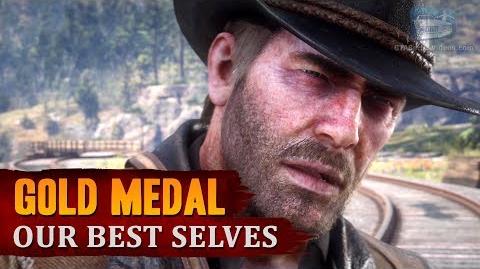