Outlaw on Horse is a minor character featured in Red Dead Redemption.

Outlaw on Horse is a member of the Williamson Gang. Judging by his manner of speech and appearance, he has likely been a lifelong criminal.

He is first encountered during the mission "Hanging Bonnie MacFarlane", in which he rides into Armadillo to inform Marshal Johnson that the Williamson Gang has kidnapped Bonnie MacFarlane and if he does not release Norman Deek, they will brutally rape and murder her. While Marshal Johnson, John Marston, Eli, and Jonah bring Deek to the gang's hideout at Tumbleweed, a shootout breaks out and the gang is killed. However, he is not among the dead.

He is encountered again during the mission "The Assault on Fort Mercer", in which he helps open the gates of Fort Mercer to let Nigel West Dickens' wagon inside. Unfortunately for the gang, Marston is hiding inside the wagon and emerges with a Gatling Gun, gunning down the outlaws. Outlaw on Horse is killed in the ensuing shootout.

{{Subst:PAGENAME}} invites his killer inside. 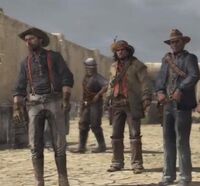 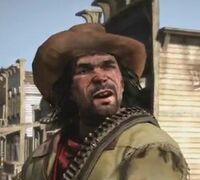 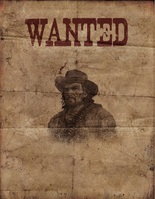 {{Subst:PAGENAME}}'s wanted poster.
Add a photo to this gallery

Retrieved from "https://reddead.fandom.com/wiki/Outlaw_on_Horse?oldid=396118"
Community content is available under CC-BY-SA unless otherwise noted.